A review of Gran’s Lemonade and Crawfish Dip from the True Blood Cookbook.

The first recipe I really wanted to try was Gran’s Lemonade.  Lemons are my husband’s favorite fruit (he eats them raw) so he was really excited for this one as well!

The recipe makes about 3 cups of lemonade.  It was very straight forward and easy to follow.  I had to alter the recipe only very slightly – instead of using hot tap water, I boiled water because our tap doesn’t get hot enough to do a good job of dissolving sugar.  Even using boiling hot water, it took a good few minutes of solid stirring to dissolve it all.

To serve, the recipe asks you to fill your glass to the top with cracked ice, pour in the lemonade, and garnish with lemon and mint.  So that’s exactly what I did.  It turned out looking quite nice!

And it tasted amazing as well!  The lemon flavor wasn’t overwhelming, and the mint was a really nice touch.  It was EXTREMELY sweet, though.  2 cups of sugar in 3 cups of lemonade!  Both of us had trouble finishing our glasses toward the end, and our stomachs were a little bit “off” later in the day.

A little bit too sweet for the both of us, and I usually don’t have any trouble eating tons of sugar.

Most people already have sugar in their kitchens, so really the only cost is the lemons and mint.  You could even drop the mint if you wanted, since it’s mostly for decoration.

You don’t need as much sugar – I would cut the sugar content in half, or even less.  It would still taste sweet and delicious, but less overwhelming!

I actually don’t eat fish, but since this is a Southern cookbook I felt like I had to make at least one fish-based recipe.  I had a round of tabletop RP (roleplay) with friends today, so I knew I could get them to try it for me and give some honest feedback.

The recipe didn’t specify if the crawfish are to be from frozen or fresh.  I image they’d taste better fresh, but here in Los Angeles all I could find was frozen.  It actually smelled pretty good while I was cooking it, despite the fishy smell.  My cat was desperately trying to get ahold of it and my husband popped his head in to check out what smelled so good. 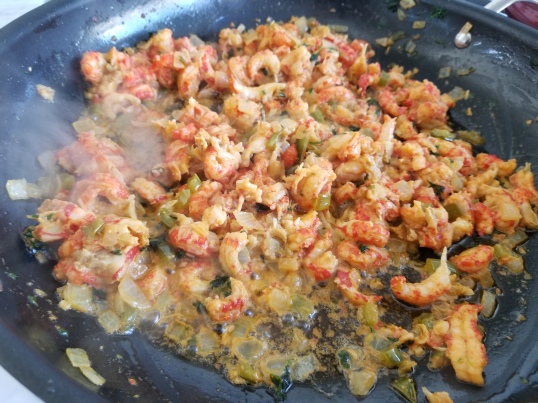 The dip went over really well.  I got a “You made this?  It’s really good!” and a “That’s dope.” from the guys.  One woman told me it was really good, but she expected it to be more spicy.  That would be my bad – the recipe does call for Tabasco sauce, but obviously I didn’t put in enough to add the kick it needed.  And my husband said even though he enjoyed it he wouldn’t make it again.

The general consensus was that it tasted good, but didn’t blow anybody away.  But some of that could be that I didn’t add enough Tabasco sauce to flavor it.

This was fairly simple to make.  It would probably be a bit more challenging if using fresh crawfish, since you’d have to peel the tails.  But from frozen, the recipe was essentially chopping up vegetables and then throwing everything into a pan.

Maybe cost would be less of an issue in areas where crawfish is common, but here in LA I spent a good $13 on the crawfish alone.  That’s a lot of money for the amount of dip it produced.

Don’t be stingy with the Tabasco sauce on this one!