A Year of Holidays: Romantic Dinner for Two (Part 1)

Part 1 of the Romantic Dinner for Two review from the The Pioneer Woman Cooks: A Year of Holidays cookbook.

The Cookbook (The Pioneer Woman Cooks: A Year of Holidays) 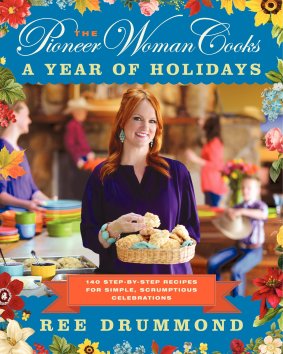 I am not only a geek about television shows, movies, books, and video games, but also about the holidays!  You should see our place at Halloween…

Last year I bought a cookbook called “The Pioneer Woman Cooks: A Year of Holidays” because I just couldn’t resist.

It wasn’t until later that I learned she’s a well-established blogger (thepioneerwoman.com), and now I visit her website often to find recipes and read about her latest adventures as a city girl turned country girl.  She’s a lot of fun to read – I highly recommend checking our her blog!

Anyway, back to the cookbook… 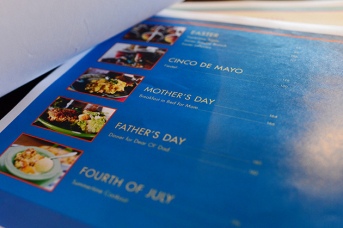 It’s a very straight-forward, easy-to-follow cookbook with photos of every single step so you can make sure you’re following along correctly.  That’s always helpful, and why I probably love this book so darn much.  Well, that and the amazing holiday-themed food!

It’s scattered with photos of her husband, children, and pets enjoying life on their ranch.  I’d be more interested in food photos, but some of these pics are pretty darn cute.

Want to purchase the cookbook?  You can get it here

I’m splitting this one up into two posts because I didn’t have time to make the dessert.  I have a full time job, and don’t get home until about 6:15pm.  If I made dessert too, we’d be eating it at 9:30/10pm, which is way too late for me!  But I did buy the ingredients for it, so expect to see Part 2 sometime this weekend!

I started with the potatoes, since it was clear that they would take the longest.

While the potatoes were boiling I cooked up some bacon for the wedge salad and made the dressing.  My cat, Ozzy, was hovering the entire time.  He’s a big dairy fan, and there was a lot of dairy in this dressing!  But look at that face…I’m weak; I gave in and let him have a lick of the sour cream.

The potatoes were still boiling when I finished the dressing, so I wrapped the steaks in bacon.  I had to pull the bacon slightly to make the pieces long enough to fully wrap around each steak.  Then I seared them over the stove before popping them in the oven. 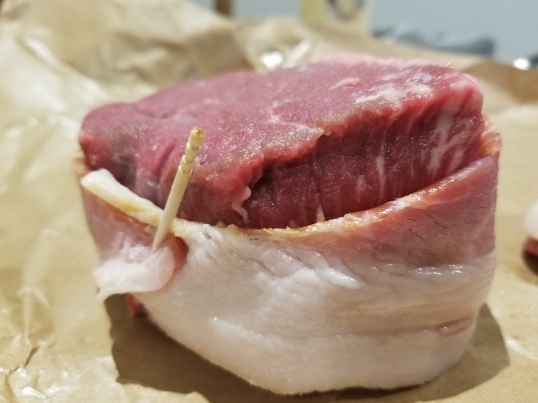 At this point the potatoes were ready.  I mashed them with all the dressings…cream cheese, butter, cream, etc., and then added in the roasted garlic.

I have to admit, I was not very good at squeezing out the garlic cloves!  A lot of them squeezed out mush instead of a clove, but the mush tasted great so…oh well!

Then I checked on the steaks.  They should have been done at this point (the recipe said 3 minutes and I put them in for 5), but they were extremely raw.  So I put them in for another 5 minutes while I prepared the salad.

I chopped the iceberg lettuce into four wedges, and put one on each of our plates.  Then I crumbled up the bacon and tossed half into the dressing before pouring it over the wedges.

Then I checked the steaks again.  Still VERY raw.  I put them back in for another 10 minutes…way longer than the 3 minutes recommended in the recipe.

While they continued to cook, I finished adding shredded cheese and bacon to the top of the wedges, and mixing up and serving the mashed potatoes.  We had a lot of dressing and potatoes leftover, but that just means leftovers tomorrow.

One more time, I checked on the steaks…they were PERFECT!

I have to say, this was one of the best meals I’ve ever made.  The mashed potatoes were my absolute favorite.  I can’t believe I’ve just been adding butter, sour cream, and salt to my potatoes all these years.  These blew me away!  My mashed potatoes will never be the same!

And my husband LOVED the steak.  He kept moaning while he was eating it, and going on and on about how amazing it was.  The bacon wasn’t cooked enough for my taste, but he’s right…the steak itself was really, really good!

Finally, the wedge salad…also very good.  The dressing was very tasty, and it’s hard to go wrong with bacon and cheese!

All in all, I’d say this one’s a keeper! 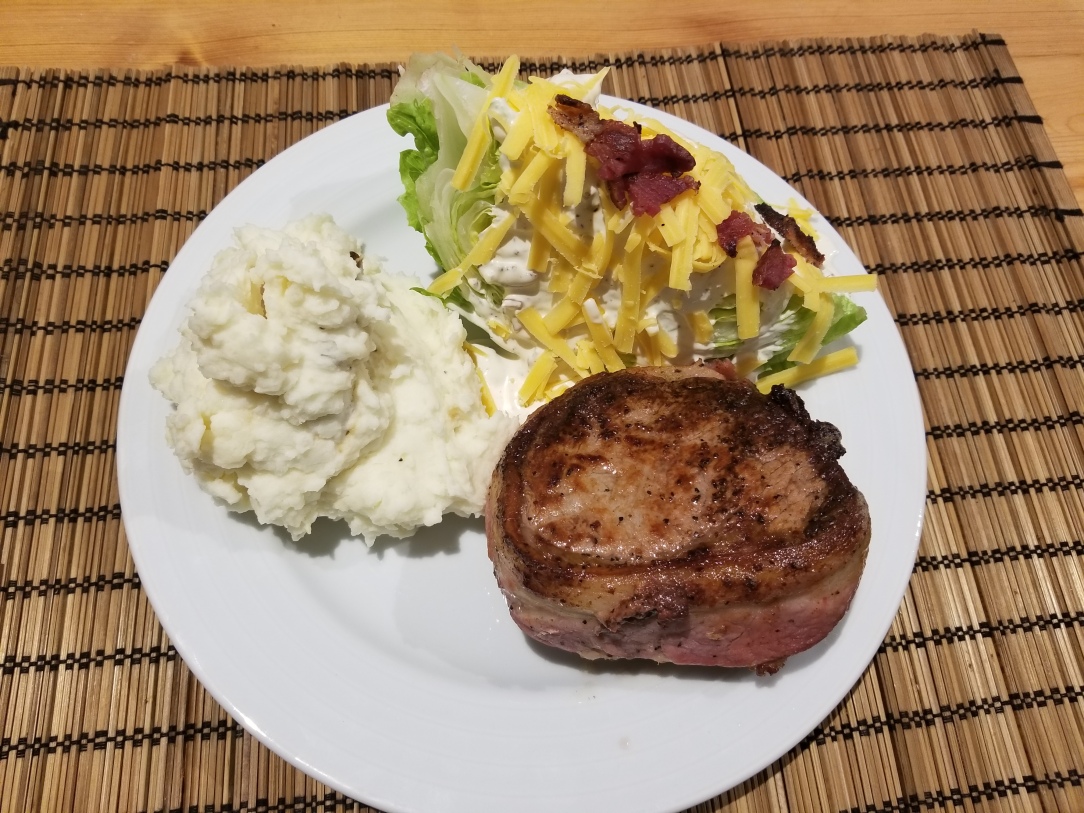 So freaking tasty.  Seriously.  This one is a definite winner!

Even though it took a long time to make this meal, it wasn’t exactly difficult.  It just involved a lot of different types of steps: chopping, shredding, baking, boiling, draining, mixing, mashing, etc.  Timing it all to come together around the same time was the most challenging part.

The steaks were the most expensive item, of course, but there are a lot of different elements to this one and that all adds up.  But honestly, it’s Valentine’s Day!  It’s worth spending a little extra for a delicious meal!

There are a couple of things you can do ahead of time so you don’t feel so rushed, like roasting the garlic for the potatoes and cooking the bacon for the salad.  You could probably make the dressing in advance as well.

The potatoes and dressing recipes can also be cut in half – we had a lot left over, and trust me when I say we really stuffed ourselves.

Don’t forget to keep an eye on those steaks!  Even though the recipe says 3 minutes only, your oven might vary.