A review of Ginger-Raspberry Muffins and Totally Surprised Birthday Cake from the True Blood Cookbook.

I actually made these muffins last night in preparation for this morning.  They kept well and tasted great the next day.

The candied ginger was a bit strong for me at times, but for the most part I really enjoyed these.  The cornmeal and raspberries combined with the ginger made for a tasty treat! 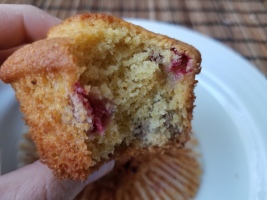 The instructions say to eat them warm, but they tasted great room-temperature as well.

The raspberry did discolor the muffins a bit, which was a bit disturbing-looking (it turned the surrounding area grey in some spots), but it didn’t affect flavor at all.

I was going to give these an 8, but my husband insisted they’re a solid 9.5.  So I bumped up the flavor score a bit.  The only reason I didn’t give them a 9 is the ginger was a bit strong for me at times.

This one was a pretty straight-forward recipe.  Just be careful not to over-mix, as with any muffin recipe.

For the number of muffins this recipe produced, it was up there in cost.  The candied ginger was probably the most expensive part, but if you were to make it yourself instead of buying it you could cut down the cost.

I would chop up the candied ginger a bit more before tossing in to avoid large bites of it. 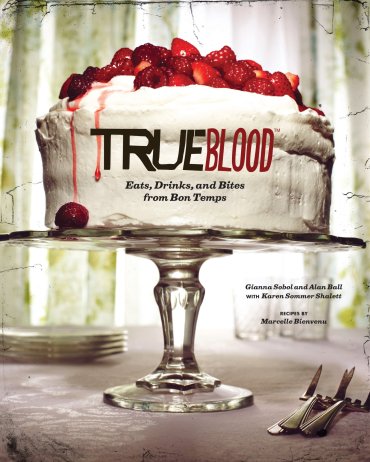 This is the cake that’s on the front cover of the book.  It looked so beautiful, I had to try it!

It took quite a long time to make, since there were several steps.  First you make the lemon filling, then the berry topping, then the cake, and finally the icing.   And then you assemble the entire cake.

Making the lemon filling was interesting.  I started off cooking sugar, cornstarch, and water over the stove.  It was completely liquid, but then as soon as it hit the boiling point it immediately turned into a jelly.

The berries were quite easy – toss the raspberries and strawberries into a bowl, add sugar, mix, and let sit.

The icing was actually more of a meringue, made mostly of egg whites.  By itself it had basically no flavor at all.  And the recipe made A LOT of icing – way more than I could possibly have fit onto that cake.

I made little “swirls” the best I could with the icing, and then topped with the berries.  After sitting in sugar for an hour or so, they dripped really nicely down the side of the cake for an almost “bloody” effect.

Once assembled, the cake looked great!  Not quite as beautiful as the cover – the consistency of my icing looks different – but I could serve this to friends.

I was surprised how much I loved this, since normally I don’t like fruit on my cake or non-sugary icing.  We’re keeping this one!

This recipe involves a lot of monitoring, constant stirring, electric mixing, etc.  Definitely not their easiest of recipes, but worth it. 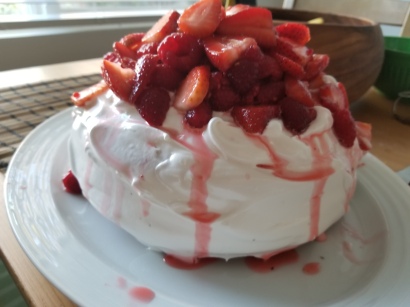 Aside from the berries and lemon, most of the items are found in the average pantry.  The cakes calls for a lot of ingredients though, which is why I’m upping the cost on this one.

If you don’t have all day to make the cake, you could make this one in pieces.  The icing would have to be made right before serving, but the rest could be made ahead of time.