A review of Way Back to Joy Banana Pudding from the True Blood Cookbook.

Way Back to Joy Banana Pudding by Sarah Newlin

Ok, this one was a giant flop.

Even though I knew it wasn’t thick enough, I finished the recipe.  I layered the vanilla wafers and bananas, and then poured the pudding liquid over top, and layered some more.  Then I whipped the egg whites to make a meringue, put that on top, and toasted it in the oven.

I even tasted the final product.  And honestly?  Not that bad.

It was hard to get past that liquid consistency, though, so the whole thing ended up in the trash. 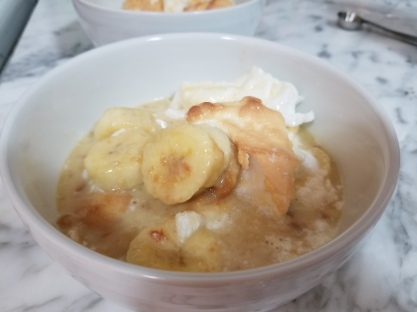 I wouldn’t even attempt this one again.  For the life of me I can’t figure out where I went wrong.  I followed the recipe exactly.  It’s too bad, too, because I was looking forward to this one!

Combining and mixing ingredients was easy.  The challenging part was heating it all over a double boiler while stirring constantly to avoid burning.  And the fact that it wouldn’t thicken added to the frustration and difficulty, as it becomes a workout after a while.

You also definitely need an electric mixer for this one, otherwise you’d never get those eggs to be the right consistency for the meringue topping.

Bananas, condensed milk, and vanilla wafers were the biggest expense on this one.

If you really want to try this one, go online ahead of time and figure out other ways to thicken the pudding if it doesn’t do it on its own with the listed ingredients.