A review of Homestead Home Fries, Carl’s Biscuits, and the Governor’s Welcome Scramble from The Walking Dead cookbook.

I decided to kick off The Walking Dead cookbook with a hearty breakfast!

The home fries are not specifically shown in the show, but the paragraph at the top of the 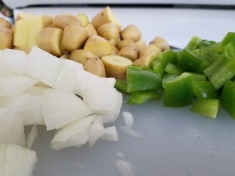 recipe suggests they wouldn’t be surprising to find at the Greene family’s farm.

They were pretty simple to make.  Lots of chopping of potatoes, peppers, onion, chives, and garlic, but in the end they were all combined with some oil and seasonings and tossed in the oven.  Definitely not complicated!

Flavor-wise they were pretty good.  Nothing outstanding, but potatoes and peppers go well together.

The recipe didn’t specify which type of bell pepper to use, so I decided to include a green bell pepper in this one.  I suppose in a survival situation it’s whatever happens to be available!

The flavor was good, but nothing that stood out as exceptionally amazing.

Lots of chopping, but the rest was simple.

The recipe mostly calls for vegetables, which aren’t very expensive.  It’s not a recipe you would typically serve by itself, however, so there would be added costs of eggs, bacon, or whatever else you wanted to add to the breakfast.

You could easily add additional peppers or other vegetables to this one if you wanted to change it up.

This recipe is actually straight from the show, as are most of the recipes in this cookbook, it seems (which I love!).  In Season 7, Episode 8, Negan invites himself to dinner at the Grimes’ household while Rick is out.  One of the foods Carl makes is biscuits, which sit in the middle of the table during a very awkward dinner.

I tried making biscuits with the True Blood cookbook as well, but they turned out quite dry.  I was curious to see if these would be better, or if I’d end up having the same problem.

The recipe gives you the option of using a pastry blender or fork to create the dough.  I opted for a fork, since a) I don’t have a pastry blender and b) I figured a pastry blender would be challenging to come by during an apocalypse.  It required some arm strength, but otherwise wasn’t too tough to mix together using the fork.

I also didn’t have a rolling pin, since I recently left it at my parents’ place, so I had to settle for the bottle of Citrus Vodka we bought for the True Blood Lovin’ in the Coven recipe.  It worked just fine, though!

The dough stuck together a lot more easily than with the True Blood recipe, and even though I rolled the dough a bit thinner than the 1-inch they suggest, they turned out great!  A lot more moist, and not dry like the True Blood recipe.  We really liked them, and will be keeping this recipe!

Delicious!  We really enjoyed these!  I think the use of buttermilk really made a difference.

I always find dough to be a bit challenging to work with.  In this case, it stuck together a lot better than the True Blood recipe, but it also stuck to the roller and the table easily as well.  The end result was worth it, though!

You do need to purchase buttermilk, which most people don’t usually have on hand, but the rest of the ingredients are common items found in your pantry or fridge.

This would be really great with some melted butter on top!

Also, I recommend eating them straight out of the oven.  We ate the last two this afternoon and they already lost some of the amazing flavor they had when we ate them right away.

When Andrea and Michonne first arrive in Woodbury, the Governor cooks them up some scrambled eggs and toast for breakfast while he and Dr. Stevens question them about their view on zombies.

Scrambled eggs are, of course, very easy to make.  They had a few changes here, though, like mixing the eggs for 2 full minutes until they’re light and fluffy, and adding extra butter into the eggs.  They also cooked at a lower temperature, which took more time but prevented any overcooking.

These were also really delicious, and we’ll be keeping this recipe too!

Scrambled eggs are always very easy, and were the first meal I learned to cook as a child.

Eggs, butter, and toast make this is a very affordable meal!