A review of Tara’s Turkey Chili and Carl’s Chocolate Pudding from The Walking Dead Cookbook.

TARA: “Lucky for us the old man’s truck was pretty much stocked floor to ceiling with

This is a homemade version of the turkey chili Tara and her family were surviving on when we first meet them in The Walking Dead.  AND it’s the picture on the front cover of the cookbook!

The recipe took a really long time to make.  It called for several types of dried chilies, which I had to go to a Latin supermarket for since our regular grocery store didn’t carry them.  And of course, I had to buy the chilies in bulk which left me with way more dried chilies than I could possibly needed! 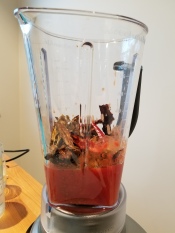 It was these little dried chilies that gave me the hardest time and took the most effort to work with.  First I soaked them until they were soft and pliable, and then I removed the stem and seeds from them once they were ready.  It was removing the stem and seeds that was a real pain.

Then they were tossed in a blender with some spices, garlic cloves, and crushed tomatoes until the mixture was smooth.  After this things got a bit easier.

Once the turkey meat was browned, it was removed from the pot and the onion was thrown in.  Peppers were then added, then the cooked turkey and the chili mixture, and finally the beans.  It all then simmered for an hour before we finally dug in.

The recipe suggests the chili be served with sour cream and cheese, if available, but since they weren’t listed in the ingredients list I didn’t pick up any sour cream.  Instead I served with rice and cheese. 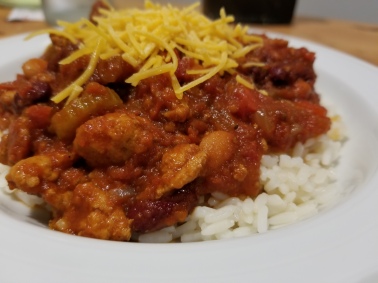 I really didn’t want to like this recipe since it took so long to make, but it’s yet another keeper from The Walking Dead cookbook!  It was SO GOOD!  It’s really spicy…I mean, we could smell the spiciness as it was cooking.  But the rice and cheese helped tame the spiciness a little bit, and sour cream would do the same.

I would actually serve this if one of us is sick.  It really made our noses run, and could probably help someone with a cold!

This chili is SO good!  It’s very spicy, but works well with rice, cheese, or sour cream. 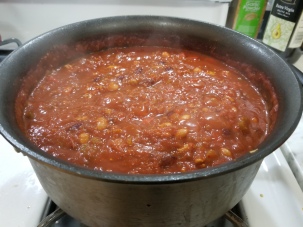 This one requires a lot of steps and a lot of work, but is well worth it in the end.

If you’re going to reuse the dried chili peppers, then this one isn’t so expensive.  It does require ground turkey, some canned goods, and fresh veggies as well, but it produces a huge amount of food that will provide leftovers for days.

If you really don’t want anything too spicy you could reduce the number of chilies and peppers used in the recipe.

This recipe promised to taste like it came straight from the can…and they delivered!  The Walking Dead cookbook has really surprised me so far!  Most of the recipes at this point have been absolutely amazing!

As a warning, you do need to start making it well in advance of when you’re planning to eat it.  It needs to be refrigerated for about 5 hours minimum.

It was pretty easy to make, though.  First I mixed up the egg yolks, cornstarch and milk.  Then the sugar, cocoa, and additional milk were cooked over the stove.  The egg/cornstarch mixture was then added in, and the pudding was cooked until it was nice and thick.

Finally, butter and vanilla were stirred in before the entire thing was covered in saran wrap and refrigerated for several hours.

The result was amazing chocolate pudding that did indeed taste like it came straight from the can!  We devoured the pudding, even after completely filling up on Tara’s Turkey Chili.

Rich chocolate flavor, and a good consistency unlike the Banana Pudding I attempted from the True Blood cookbook!  We’ll be keeping this one, too!

The steps themselves are very simple, but it does require constant monitoring and stirring since cooking milk is involved.  You definitely don’t want the milk to burn!

The ingredients were mostly standard things that will already be in your pantry or fridge: eggs, milk, sugar, cocoa powder, vanilla, butter…