A Feast of Ice and Fire: Crusty White Bread and Modern Bean-and-Bacon Soup

A review of Crusty White Bread and Modern Bean-and-Bacon Soup from the Feast of Ice and Fire Cookbook.

I’m starting off the month (a little early) with recipes from The Wall.  Located in the extreme North of Westeros, the Wall is a giant fortification made of ice that stretches across the continent.  It’s protected by the men of the Night’s Watch.  It’s always cold there, so a lot of soups and warm beverages are served to help keep warm.  The men are usually forced to eat whatever happens to be available,which is usually preserved meats, pickled foods, and dried goods.

“The Great Hall of Winterfell was hazy with smoke and heavy with the smell of roasted meat and fresh-baked bread.” – A Game of Thrones

This recipe is available on the Inn at the Crossroads website here!

I’m not sure why they put this recipe in The Wall section when the quote is from Winterfell, but it’s safe to say The Wall and Winterfell would have similar types of food since they’re so close to each other.

I started on this bread yesterday by making the dough, then leaving it in the fridge to rise overnight.  It didn’t require very many ingredients which was nice, but required more flour than the recipe called for.  It was WAY too sticky, and it was tough scraping it off my table later.

This morning the dough had expanded quite a bit, so I divided it up into three sections, formed them into a ball-shape, and put them on a baking tray sprinkled with cornmeal.  After they rested for about 40 more minutes, I tossed them into the oven along with a baking dish of water to make the bread’s exterior crusty. 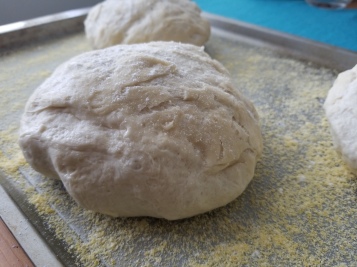 The water worked!  The bread was very crusty on the outside, and nice and soft on the inside.  It tasted amazing!!  Almost a little bit like sourdough.

Simple but very tasty bread, similar to sourdough.  We’re keeping this one!

Dough is always a pain to work with, and this one in particular was extremely sticky.  The dough was a lot easier to work with after it was left to rest and rise.

You’ll need to purchase some yeast if you don’t already have some, and possibly some cornmeal and/or honey as well.  The rest is flour, salt, and water.

I’d add a little bit more flour into the dough before you place it onto a floured surface for kneading.  It will undoubtedly need more than what is initially called for.

“[Sam] had not eaten since that bowl of bean-and-bacon soup with Pyp and Grenn.” – A Feast for Crows

There was both a Medieval and Modern option for this soup, and I decided to make the modern one.  The medieval one actually does sound quite good – it includes more vegetables and excludes the feta cheese and orzo pasta that was in the modern version.

After cooking the bacon, the onion was sautéed in the grease before the beans, chicken stock, and thyme were added in.  The mixture cooked for about 10 minutes, and then was pureed in the blender.

Finally, the rest of the ingredients were added in and cooked for about 5 minutes until the pasta was done. 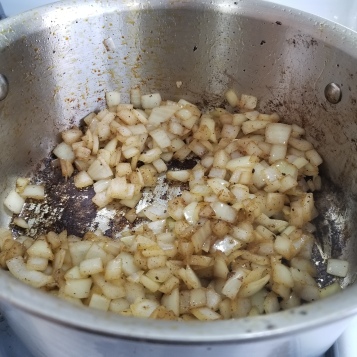 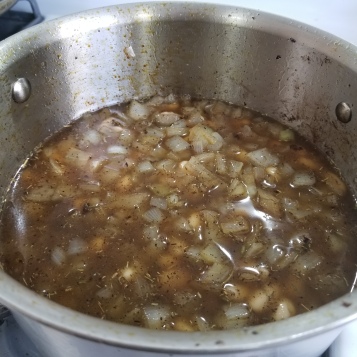 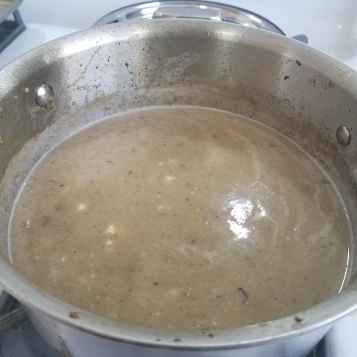 The soup was topped with more crumbly bacon, feta cheese, and thyme before serving.

We loved this!  It was so delicious!

Another keeper!  The soup had a kind of smoky flavor from the bacon, and the thyme worked perfectly with the bacon, beans, and feta.

The soup wasn’t too complicated, but did require more steps than a typical soup, including pureeing in the blender.