A review of Glazed Easter Ham, Cheddar-Chive Biscuits, and Orange-Vanilla Fruit Salad the The Pioneer Woman Cooks: A Year of Holidays Cookbook

We have friends who host Easter Brunch every year, so I didn’t make the entire meal that’s listed in the “Easter Brunch “section of this cookbook.  Instead, I made three things: Glazed Easter Ham, Cheddar-Chive Biscuits, and Orange-Vanilla Fruit Salad.  Click the links to visit The Pioneer Woman’s blog and get the recipe for yourself! 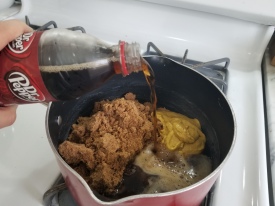 I started prepping some of the food yesterday so I wouldn’t be overwhelmed this morning.  Very helpfully, there’s a list of everything that can be prepared the day before on the first page of the Easter Brunch section!

The glaze for the ham and the syrup for the fruit salad could both be prepared yesterday, and I was able to grate cheese and chop up chives for the biscuits as well.

Both the glaze and syrup were prepared in a similar way: toss everything in a saucepan and bring to a simmer.  The Dr. Pepper bubbles up like crazy, but that subsided after a while.  I did have to keep an eye on it, though.

This morning I started bright and early with tossing the ham in the oven.

The recipe includes cutting the ham in a sort of diamond pattern, and then putting cloves in it.  The problem is that I bought a spiral sliced ham not knowing the difference, so I couldn’t cut the diamond slices into the ham or I’d be cutting off slices.

I didn’t have a roast pan, so I made do with my largest baking dish on top of a baking sheet, in case of spill-over. 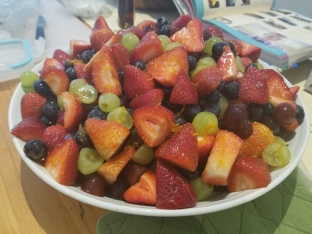 While the ham roasted for 2 hours, I started chopping up the fruit for the salad.  It all went into a giant bowl…and I mean giant…and then I tossed it with the orange-vanilla syrup that was prepared yesterday.

The fruit salad was covered with cling wrap, and then stored in the fridge until we left for brunch.  I completely forgot to add the mint leaves, but trust me, it didn’t need them!

Next was the biscuits.  I tossed all of the ingredients, except for the buttermilk, into our food processor.  Then the buttermilk was added slowly until it all stuck together.

Around this time I started adding the glaze to the ham.  The foil that was covering the ham was removed and the glaze that I prepared yesterday was brushed on top.  Then the whole ham went back into the oven for 20 minutes.  I repeated this three times until the ham was done.

During those 20 minute breaks I scooped out the biscuits onto baking sheets and prepared them for the oven.

When the ham was finally done, it looked beautiful!!!

I put the ham on a bed of parsley, and then covered the entire thing in a ton of foil to keep it warm. 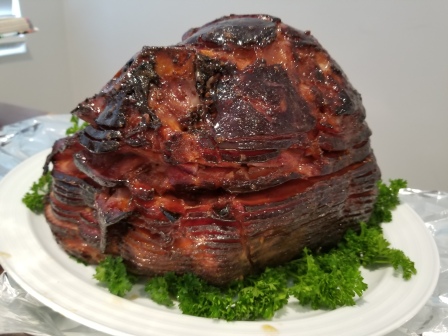 Then I increased the temperature of the oven and put in the biscuits.  Once the biscuits were done, it was all packed up and brought over to brunch!

All three recipes were sooooooo good!  My personal favorite was the orange-vanilla fruit salad, but the biscuits were a close second.  Ham is not on my list of favorite foods, but this particular ham was very tasty!  One of our friends went back four times to get more, and I received numerous compliments and feedback about how delicious it was. 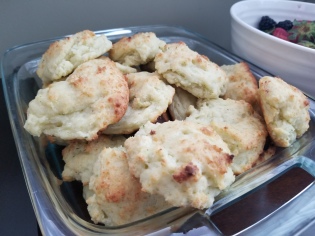 All of it was AMAZING!

The fruit salad consisted of strawberries, blueberries, grapes, and a orange-vanilla syrup.  You really can’t go wrong there.

The biscuits were moist and delicious, and full of cheesy/chivy goodness.

And the ham had a nice crisp layer of glaze baked into the top, and stayed warm for hours.

In all cases, these recipes were not very complicated.

The fruit salad was of course the easiest, with the syrup being the most difficult part.

For the ham, the glaze was the most difficult part, and it was prepared about the same as the syrup for the fruit salad.

Lots of pricey items here!  The ham was definitely top of the list, but the vanilla bean that was required for the fruit salad was close behind.  They cost $10 for two!

3 comments on “A Year of Holidays: Easter Brunch (Part 1)”