A Feast of Ice and Fire: Breakfast on the Wall

A review of Breakfast on the Wall from the A Feast of Ice and Fire cookbook.

Breakfast on the Wall

“When day broke, Jon walked to the kitchens as he did every dawn.  Three-Finger Hobb said nothing as he gave him the Old Bear’s breakfast.  Today it was three brown eggs, boiled hard, with fried bread and ham steak and a bowl of wrinkled plums.” – A Game of Thrones 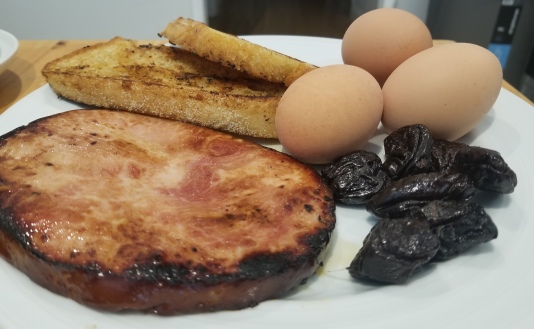 Continuing with The Wall recipes, this morning I made us a hearty breakfast that was served to Mormont (aka The Old Bear).  Since my husband usually makes breakfast, he was thrilled that he got to sleep in while I cooked!

The recipe was pretty simple, and didn’t take long to make at all.  The ham steaks were seared over the stove while the eggs were hard boiled.  Then the bread was fried in butter in the same pan as the ham.  Everything was served on a platter with some prunes, as well (aka “wrinkled plums”).

It was very good, and if I were a bigger fan of ham and prunes I would have given this a full 10/10 on taste!

We both really enjoyed this meal, and neither of us really love ham or prunes.  Surprisingly, I didn’t mind the prunes at all with this meal.  It worked very well to offset the savory taste of everything else.  But the best part of the meal was definitely the bread fried in butter!

Nothing was very complicated, but you do need to be pretty coordinated to have it all finish around the same time!

The ham steaks were the most expensive thing on the menu this morning.  I purchased bread and prunes as well for this one.  While it’s not terribly expensive, it is more than I would usually spend on breakfast.