A Feast of Ice and Fire: Medieval Poached Pears

A review of Medieval Poached Pears from the A Feast of Ice and Fire cookbook.

The South is divided up into several sections, but in the cookbook they group them under the one category.  Each area specializes in different food – the Vale relies more on animal meat and dairy products, the Riverlands and the Iron Islands have plenty of fish, and the Reach grows a huge variety of fruits and vegetables.

“The war had not touched the fabled bounty of Highgarden.  While singers sang and tumblers tumbled, they began with pears poached in wine…” – A Clash of Kings

After the baked apples were such a success, I was very curious about this recipe.  Sadly, it wasn’t nearly as tasty and ended up being a pain to make.

I’ve never poached a pear before, and so maybe that’s why I found these directions to be quite vague.

First I “parboiled” (I googled it, and it just means “boiled”) the pears for five minutes, and then the skin was removed.  This was already extremely difficult.

While I was attempting to remove the skin, I’d have to lie the pear on its side at some point.  Since it was already boiled and very soft, every time I lay the pear on its side it flattened there.  But when I tried holding the pear upright, it still slide sideways and the stem I was holding onto started cutting a clean line right through the pear!

And it took FOREVER to remove all of that skin.  It came off pretty easily, but in tiny pieces each time.  It definitely did not look smooth and perfect like their picture when I was done.

Next I boiled the wine and spices in a pan, as directed.  Then the pears were added, and the temperature was reduced to “just below a simmer.”

Obviously the pears were not exactly covered by the liquid, so the tops weren’t getting any color.  I started spooning some of the liquid over the pears to help with this.

I was left with a ton of wine at the end, and even though I boiled off about half as directed and poured it over the pears, there was still way more leftover than what was needed for this recipe. 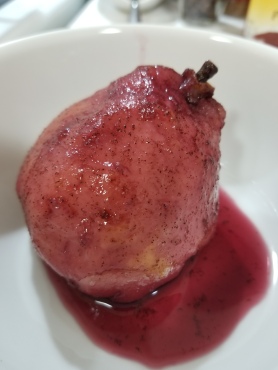 The flavor was okay.  It tasted like a plain-old pear with some light wine and spices.

This recipe is not worth the trouble, in my opinion!

The flavor was pretty bland, and mostly just tasted like a pear.  There was a mild flavor of wine and spices, but I don’t think it was strong enough.

It was tough to peel those pears after they were already boiled.  They kept flattening on whichever side I leaned them on, and kept falling over when I tried to keep them upright.

The skin also took an extremely long time to remove, and the directions were pretty vague so I wasn’t exactly sure what to do about getting the tops of the pears in the wine.  I decided to spoon liquid over them, since lying them down in the wine would just lead to more flattened pears.

The biggest cost here is the wine, of course.  So it really depends on how much you spend on the bottle you pick up.  You’ll also need to pick up some pears, and possible some of the required spices if you don’t already have them.