Cooking in the Medieval Ages

An overview of what it was like to cook in the Medieval Ages.

I think we can all agree that cooking must have been a very different experience in the Medieval Ages.  They didn’t have all of the fancy cooking gear we have now.

“Stoves”?  What are those?  And what do you mean everybody has a frying pan in their house?

They also couldn’t just walk out to the supermarket and pick up everything they needed.  They had to work for it.

So what was cooking like in the Medieval Ages?

Mostly food was cooked over a fire, and not a stove like we use now.  Although, if you have a gas stove at home, I guess you are technically still cooking over a fire! 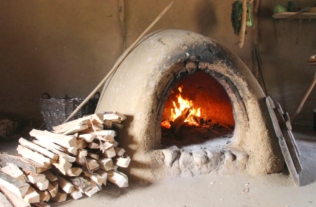 They also had ovens, but they were expensive to build and generally only found at the baker’s or at the home of a wealthy person.  And they certainly didn’t look anything like today’s ovens.

Ovens would be made of clay, stone, or brick.  They would light a fire inside of the oven, and then once the fire was reduced to embers they’d rake out the ashes and pop in the food.  The walls of the oven would be hot enough from the fire to cook the food.

They did have pots and pans, which came in handy for soups and stews and such.  If they were cooking an animal, though, they often did this on a spit over the fire.

They also had strainers, colanders, knives, mortar & pestle, and other items that we still used today.  I’m sure their mortar & pestle got a lot more use than mine, though, since they would have to grind their own spices, herbs, and grains.

And most food was eaten with their hands and knives, since forks were not introduced until the end of the Middle Ages.  And even then, they were considered to be a little bit “silly.”

While the food may not have been as fancy as today, given the limited equipment they had to work with, people certainly did their best with what they had.

When it came to meat, they ate all of the food we eat today and then some.  I mean, how often do you eat rabbit or squirrel?  But the most popular meat was generally some sort of bird (chicken, goose, or duck), followed by pork, venison, and beef.  Fish was also eaten quite a bit.

Generally meat was considered expensive, especially beef, so it was more common in the diet of the upper class.  They had to keep the meat in large vats of salt to prevent it from spoiling, so it was usually preferred if the meat was fresh and not yet salted.

Grains were a staple in the diet of someone living during this time.  If you had money you would eat wheat, but everyone else kept to barley, oats, and rye.  These were used in bread, porridge, gruel, and pasta.

Bread was baked in an oven, just like we do now.  Since most people did not have an oven in their home, however, they usually purchased it from the local baker.  The flour had to be ground by hand, so making bread was not an easy process.

(Side note: did you guys know that Hot Pie from Game of Thrones started his own bakery?!  Sorry…got distracted…)

A variety of different vegetables were eaten, with leeks, turnips, cabbage, peas, and lentils being among the most popular.  Herbs like basil, mint, and parsley were often used as well.

To thicken sauces, soups, or stews they would usually use either almond milk (which they made by hand) or bread.  Bread does not fly as a thickening agent any more, but we still do use flour – one of the key ingredients in bread.

As for cooking fats (i.e. oil and butter), they pretty much used either olive oil, bacon, or lard.

To sweeten foods, honey was usually used.  But depending on the meal, sometimes they might throw in a dried fruit, like dates or figs, to do the job.

Other seasonings included wine, vinegar, ginger, black pepper, mustard, cinnamon, cloves, and even saffron…which is now the most expensive spice on the planet!  They didn’t only use saffron for taste, but to color their food as well.

And there you have it!  That’s definitely not ALL information about Medieval cooking, but a “taste,” if you will, of what the cooking process involved during that time.

Now aren’t you glad to be cooking in the 21st century?