A review of “Modern Leek Soup” and “Medieval Arya’s Snitched Tarts” from the A Feast of Ice and Fire Cookbook.

“The wedding feast began with a thin leek soup, followed by a salad of green beans, onions, and beets…” – A Storm of Swords

I was originally planning to make the medieval version of this soup, but then saw that the medieval one included mushrooms.  As someone who really doesn’t like mushrooms, I figured it would be best to do the modern version instead.

I wouldn’t call this modern version a “thin” leek soup as the quote describes, but it is really good so I don’t even care!  Definitely a soup good enough to be served at a wedding…even if it’s the Red Wedding.

As with most soups, this wasn’t too tough to put together. 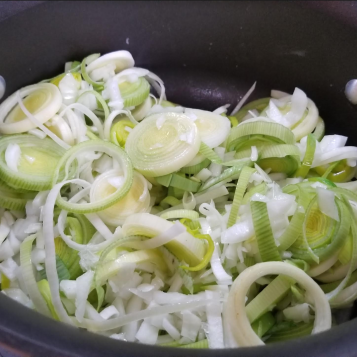 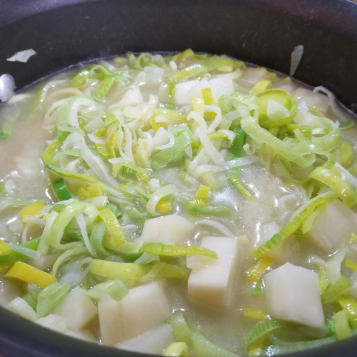 Finally, the potatoes were mashed with a potato masher and a final slab of butter was added before pouring into bowls.

We loved this soup, and would definitely make it again! 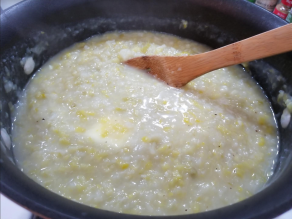 A definite winner in our books.  There aren’t a lot of meatless recipes that we save, so we were excited about this one!  If you’ve never had a leek before, it tastes similar to onion.  So if you like onion soup, you’ll like leek soup!

Another one of those “throw everything into a pot over the stove” kind of recipes.

You’ll need to purchase the vegetables, but they are all pretty affordable: leeks, potatoes, and an onion.  If you don’t already have chicken stock in your pantry, that will be something to pick up as well.

“She filched one anyway, and ate it on her way out.  It was stuffed with chopped nuts and fruit and cheese, the crust flaky and still warm from the oven.  Eating Ser Amory’s tart made Arya feel daring.” – A Clash of Kings

These were less successful than the leek soup.  It may have been something that’s my fault, or the directions weren’t specific enough.  I’m not really sure!

Also, these were not quite like the description in the book either.  They were missing the cheese part, and just contained the fruit and nuts.

I started off by making the “Medieval Sweet Dough,” and had to add about 3 times the amount of water that the recipe called for in order to get it to stick together.  Not a great start!

Then I made the filling, which included boiling everything over the stove.  First it was the honey and wine, and then some spices, dried fruit (prunes, currants, and figs), and red wine vinegar were added.  The mixture kept simmering until the syrup was reduced by 1/3 – 1/2.

The dough was then rolled out and cut into 2-inch circles.  Here’s where I may have gone wrong.  I rolled the dough out to 1/4 inch thickness, but the dough kept puffing back up to more than that. 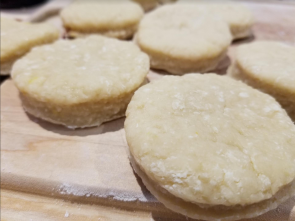 To combat this, I flatted them as best I could right before putting them into the fry oil.  But even still, the dough came out under-cooked.

The first two I dropped into the oil started burning on the outside after only a few seconds in the oil.  So I lowered the temperature slightly before cooking the rest. 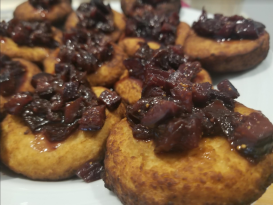 Then the filling was added to the the tarts, topped with some candied walnuts, and they were ready to eat!

My tart shells didn’t look as curved or flat as they appeared in the cookbook.  And, as mentioned above, the dough in the middle was definitely under-cooked.  I tried one of the burnt ones as well, and it was the same situation.

I was able to eat the edges of the tarts though, and while it wasn’t bad, it was definitely not a favorite.  If you really like dried fruit then you’ll probably enjoy these.  Otherwise, I’d skip these and try the modern version instead. 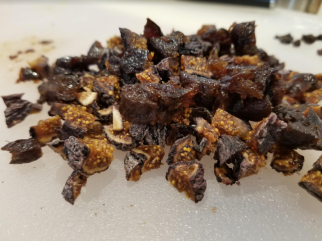 The wine and the dried fruit did compliment each other nicely, but I didn’t enjoy these all that much.  I wouldn’t make them again.  But if you do like the flavor of dried fruit, like raisins and prunes and figs, then you’ll likely enjoy these tarts.

Making the filling was fairly straight forward, it was really just making and frying the dough that was the challenge.

The dough is not technically part of the recipe itself, so I wasn’t sure if I should include it in the difficulty level of this particular recipe.  It’s listed as an ingredient here, but the recipe for the dough is found earlier in the cookbook.

If you really want to give these a try, then maybe a different dough would fry better than the Medieval Sweet Dough recipe they use.