A Feast of Ice and Fire: Sweetcorn Fritters & Bowls of Brown

A review of “Sweetcorn Fritters” and “Bowls of Brown” from the A Feast of Ice & Fire cookbook.

“Tyrion listened with half a ear, as he sampled sweetcorn fritters and hot oatbread baked with bits of date, apple, and orange, and gnawed on the rib of a wild boar.” – A Storm of Swords 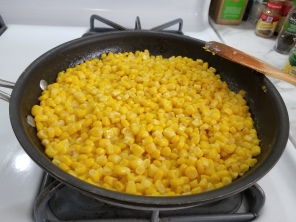 I was pretty curious about these – they seemed like they would be good when I read the recipe, but you never know!

The first thing I noticed was that they were pretty easy to put together.

I sauteed the corn in some butter, and then mixed it with flour, cornmeal, egg, milk, and black pepper.  This formed dough.

Then the dough was dropped in hot vegetable oil and cooked on both sides. 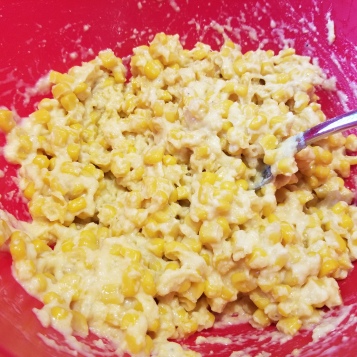 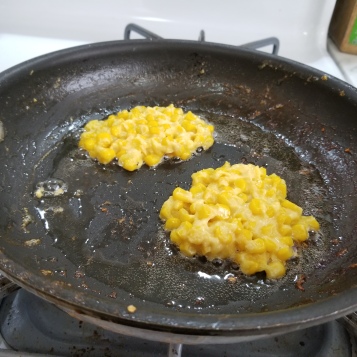 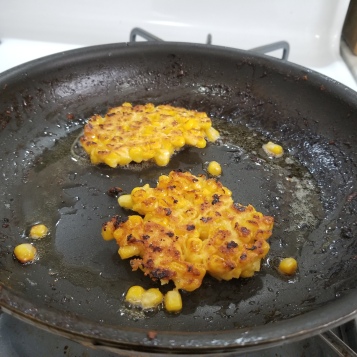 And then they were done!

They tasted really good!  Mostly like fried dough, to be honest, but you can taste the sweetcorn in there as well. 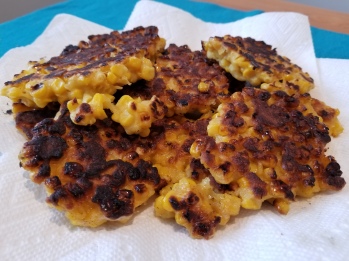 These were easy to make, but be careful not to overheat the oil or overcook the fritters!  I ended up with some slightly burnt edges, though those ones still tasted amazing.

Cost will depend on how much you already have at home.  You’ll most likely need to purchase the corn (either fresh on the cobb, canned like I did, or frozen), and you may need to pick up some cornmeal as well.  For the amount of fritters it makes, though, I’d say it’s pretty cheap!

You might consider cutting the recipe in half, especially if you’re just making them for 2-3 people.

“In the Bottom there were pot-shops along the alleys where huge tubs of stew had been simmering for years…but the brown wasn’t so bad.  It usually had barley in it, and chunks of carrot and onion and turnip, and sometimes even apple, with a film of grease swimming on top.” – A Game of Thrones

Bowls of Brown are definitely a Flea Bottom classic, so I had to make this!

In the book they mention street rats and murdered people being thrown into these stews, but lucky for me I got to choose the meat to include in my Bowl of Brown. 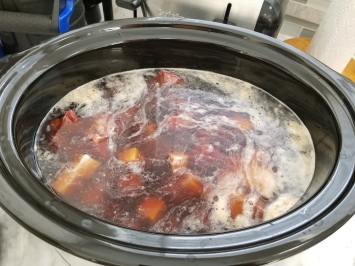 The recipe calls for 5 lbs. of mixed meat…I opted for three chicken breast, a steak, and two small pork chops.  It all amounted to about 4.5 lbs. of meat.

This is a slow cooker recipe, so it’s pretty straight-forward.  You can also cook it in a pot, but trust me when I say it’s way better in the slow-cooker.  In a pot you may get more liquid evaporation. 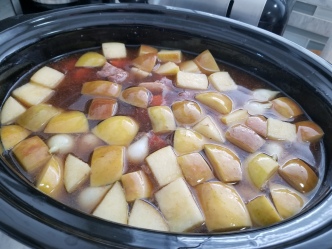 Once all of the meat was chopped up, I threw it all into the slow cooker.  I topped it with dark beer and beef broth, and then let it sit for about 5 hours.

The recipe says to cook it for 6 hours on “medium-high” heat, but my slow cooker really only has “warm,” “low,” or “high,” so I went with the high setting and cut back the time a little bit.

After the five hours, pearled onions (I love these!), chopped up apple, barley, carrot, and some spices were added and it cooked for another 2 hours until it was done. 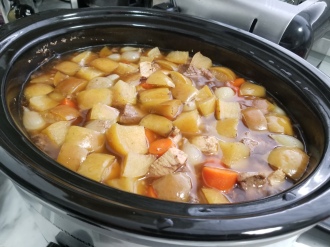 The beer was kind of an interesting addition, and worked well with the beef broth and barley.  And I was nervous about the apple, but it was pretty good!  It absorbed most of the stew flavor, so the sweetness from the apple was barely there.

That being said, it’s not my favorite stew.

Pretty good stew overall, but not the best I’ve ever had.  The barley in particular was my favorite part of this stew.

Lots of chopping and some peeling involved, and you’ll need to boil the onions a bit in order to peel them, but aside from that this recipe was easy to make. 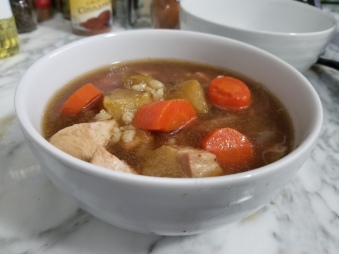 There’s a full 5 lbs. of meat in here, so be sure to check prices when you make your purchases!  I ended up with mostly chicken breasts because it was so much cheaper than the beef and pork.  Cost will ultimately come down to what type of meat you buy, since the rest of the ingredients are pretty average – barley, carrot, pearl onions, etc.

It’s a stew, so feel free to add vegetables and/or meats as you’d like, or remove what you don’t like!