“[Cinna] presses a button on the side of the table.  The top splits and from below rises a second tabletop that holds our lunch.  Chicken and chunks of oranges cooked in a creamy sauce laid on a bed of pearly white grain, tiny green peas and onions, rolls shaped like flowers, and for dessert, a pudding the color of honey.” – The Hunger Games, Chapter 5

We’re starting off this weekend with the first meal Katniss eats at the Capitol: Chicken and oranges in a cream sauce over rice. 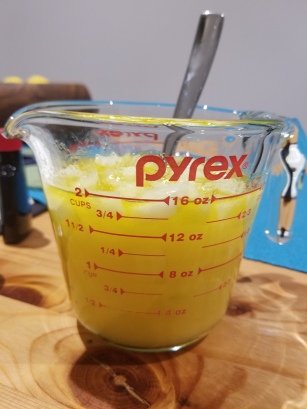 To be honest, the description doesn’t sound all that appealing to me.  I like the idea of orange-flavored chicken (makes me think of Chinese food!), but chunks of orange?  In a cream sauce?  We’ll see…

I actually made the marinade for the chicken yesterday night, since the chicken had to marinate for at least 4 hours.  No harm in having it sit for 24 hours instead!

The chicken had to be pounded down to about a 1/2 inch thickness.  We don’t own a meat pounder, so I made do with the bottom of a wine bottle.  It wasn’t perfect, so the chicken was a bit thicker in certain areas. 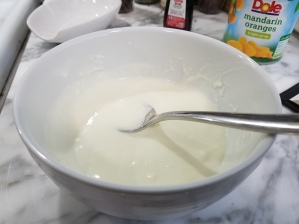 Then the chicken breasts were put into individual bags, and the marinade was poured over top.  They were put in the fridge until I was ready to cook them.

When the time came, I started off by making the cream sauce: just combining heavy cream, cornstarch, and more orange extract.  The skillet was then heated, and the chicken breasts lightly coated with flour before being added to the skillet.

Now here’s where I ran into issues.

The recipe says to brown the chicken on both sides, and then add the cream sauce and orange slices.  But because the chicken was not uniformly 1/2 inch thick, and therefore took longer to cook, the cream sauce burned and evaporated by the time it was cooked through. 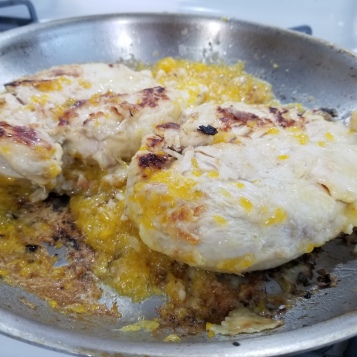 I ended up making a second batch of the cream sauce, since I had enough ingredients

remaining, and adding it to the skillet about 1 minute before we removed the chicken breasts.  This seemed to work well.

Another issue was that the flour did not stay attached to the chicken at all.  It peeled right off in the pan and ended up burning.

The chicken breasts were served over rice, just like in the books, but the ingredients lists does not include rice.  So I’m really glad I read through the entire recipe first, instead of going purely based off the ingredients.  I would have missed that, otherwise.

I really liked the chicken, but my husband thought it was just okay.  He didn’t really like the texture of the orange sauce, since the oranges fall apart in the pan.

The chicken has a very sweet flavor because of the oranges.  If you like sweet and savory combinations, then you’ll enjoy this.  It’s not my favorite chicken dish, but it’s still very good.

You can barely tell that there’s cream in this recipe in the end, so don’t worry about it being too creamy.  The cream mixes with the oranges, which fall apart, and it ends up really just being a chunky orange sauce.

Making the marinade and sauce are both easy – just combine ingredients.  You will need to pound the meat, though, and cut up quite a bit.  And be prepared to improvise on the fly if the chicken cooks too slowly!

You may also need to purchase: orange juice, onion, heavy cream, and canned mandarin orange segments.  And of course the chicken breasts!

I would recommend cooking the chicken until it’s nearly fully cooked through before adding the cream sauce.  This way you can prevent overcooking it to the point of burning or complete evaporation.

I also recommend making this in a non-stick.  That will probably help prevent the flour coating from sticking to the pan, as well as the cream sauce from burning.