A review of Mrs. Everdeen’s Breakfast of Mush from the Unofficial Hunger Games Cookbook.

“My mind wanders to my mother and Prim.  They must be up.  My mother getting their breakfast of mush.  Prim milking her goat before school.  Just two mornings ago, I was home.” – The Hunger Games, Chapter 7

My husband was very open about how not excited he was to try this recipe, so I actually had this for dinner while he wasn’t home instead of breakfast.

If you’ve read my “About” page, you already know that my mom’s side of the family is Italian.  So I have actually had polenta before.  That being said, I have an issue with mushy textured food – I can barely stomach eating a banana unless it’s blended into a smoothie or cooked into a baked good.  So while I do enjoy baked polenta (ideally smothered in my mom’s ragu), the mushy stove-top stuff?  Not so much. 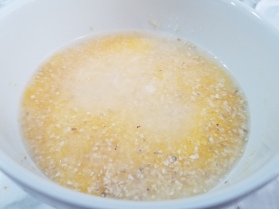 And of course this recipe calls for the mushy stove-top polenta.

First the polenta is mixed with a small amount of water in a bowl, and then more water and some milk are combined in a pot over the stove.

Once the milk comes to a boil, the polenta/water mixture was added in and cooked at a low heat until thick. 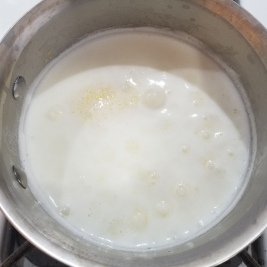 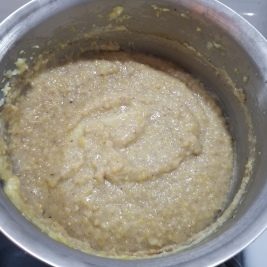 At this point I added in brown sugar, vanilla, and cinnamon before ladling into a bowl and topping with more cinnamon, heavy cream, and blueberries. 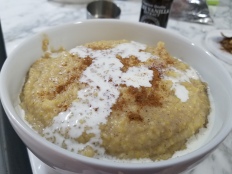 It tasted like bland oatmeal.  My husband is thrilled that he skipped this one.

The cinnamon and brown sugar were a nice addition to the polenta, but even they couldn’t make the mush tasty enough for me to make again.  All in all this was a pretty bland meal, and I really didn’t like the texture.

You’ll need to monitor the polenta to make sure you take it off the stove at the appropriate time, but otherwise this is a fairly simple breakfast to make.

Polenta is cheap – it used to be to Italians what potatoes were to the Irish: a cheap and easy meal to make during hard times, when it otherwise would have been tough to feed your family.

Other ingredients are brown sugar, cinnamon, milk, and blueberries.