A review of “The Boy with the Bread: Hearty Raisin Nut Bread” and “Clover-Mint Tea” from The Unofficial Hunger Games Cookbook.

The Boy with the Bread: Hearty Raisin Nut Bread

“When I dropped them on the table, Prim’s hands reached to tear off a chunk, but I made her sit, forced my mother to join us at the table, and poured warm tea.  I scraped off the black stuff and sliced the bread.  We ate an entire loaf, slice by slice.  It was good hearty bread, filled with raisins and nuts.” – The Hunger Games, Chapter 2

OF COURSE I was going to make the life-saving bread from Peeta’s bakery.  You didn’t think I’d forget, did you? 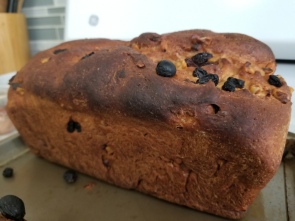 As with pretty much all bread, I had to start the process early in the day.

First the yeast is dissolved in warm water, and then the rest of the ingredients are added and mixed until thoroughly combined.

The dough is kneaded for about 10 minutes, until you are 100% confident that your hands are definitely going to fall of this time, and then it sits in a greased bowl to rise for an hour. 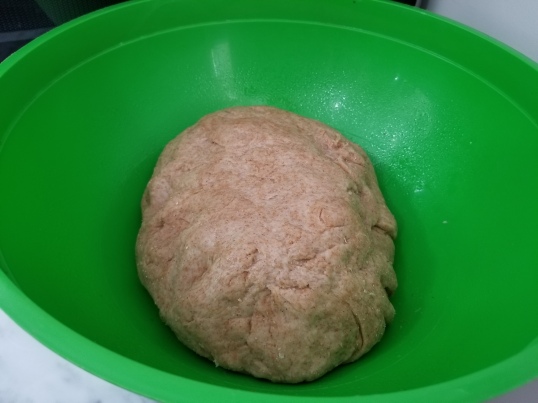 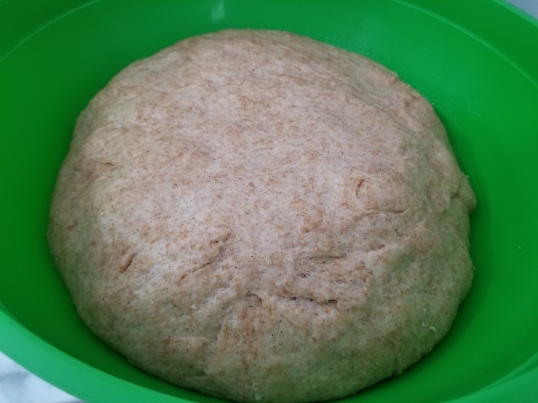 Next step is to add in the raisins and walnuts, knead some more, and then divide the loaf in half.  Each half was put into a loaf pan (although in my case I didn’t have two loaf pans, so one half was just formed into a ball and put on a regular baking sheet).

Then they were left alone to rise for another hour. 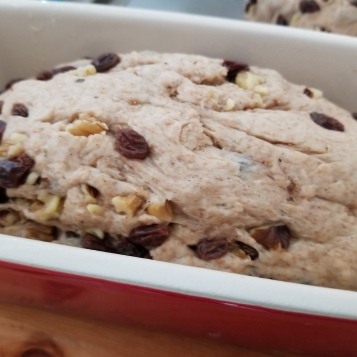 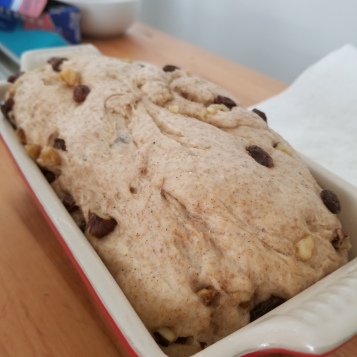 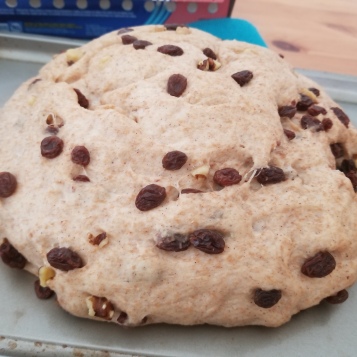 Finally I fired up the oven and popped in the loafs. 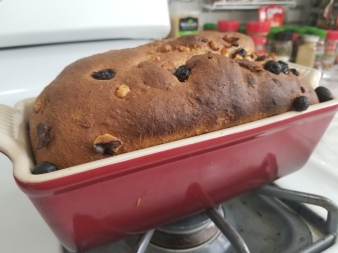 Technically I was supposed to brush the tops of each loaf with egg whites mixed with water, but I completely forgot that step.

No matter, though!  The bread was still great!  I should have taken the loafs out about 5-10 minutes early than called for though, as they were slightly burned on the bottom and little too dark on the top.

The raisins and walnuts are really nice in this bread, and I liked that the recipe called for wheat flour in addition to regular all-purpose flour.  It certainly made the bread seem more “hearty.”

Maybe brushing the egg whites on top would make a difference, or maybe it’s because the loaves were slightly overcooked, but despite enjoying the bread it didn’t end up being a favorite. 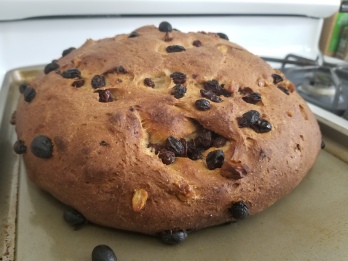 This is not the most complicated bread I’ve made, but it’s not the easiest, either.

In addition to the raisins, walnuts, and yeast, you may need to also purchase whole wheat flour or honey.  Most other items you will probably already have: milk, butter, all-purpose flour, cinnamon, sugar, eggs.

Keep an eye on the bread loaves while they cook, and be prepared to take them out early if needed.

“For three days, we’d had nothing but boiled water with some old dried mint leaves I’d found in the back of a cupboard.” – The Hunger Games, Chapter 2 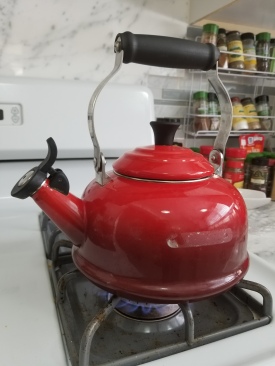 Apparently the author of the cookbook took some creative license here and decided to add clover flowers to the tea, instead of just mint leaves.  They also decided to chill this tea instead of serving hot, as Katniss likely would have drank it.

Also, now that I’m copying down the direct quote from the book, I’m noticing that I really didn’t need to use “fresh mint leaves” like they called for, since Katniss didn’t. 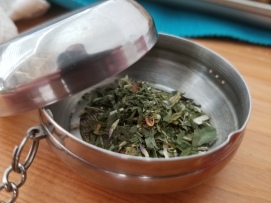 No matter, though – they should taste the same!

So I put the dried clover flowers/leaves into a tea infuser, and then put the infuser and some fresh mint leaves into a container.  I used a Pyrex glass measuring cup that I could use to both measure with and easily pour from later, but pretty much any heat-tolerant container would work. 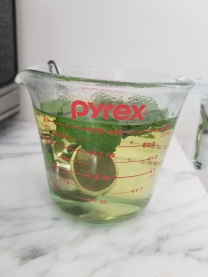 Then the hot water was poured over top and the leaves steeped for 10 minutes.

Finally, I took out the leaves and put the tea into the fridge until it was cold.

Despite my frustration with some major deviations from the book on this one, the resulting iced tea is something we will definitely be making again.

It was very good!

This tea was really, really good!  I mostly tasted the mint more than anything else.  It’s very light and refreshing. 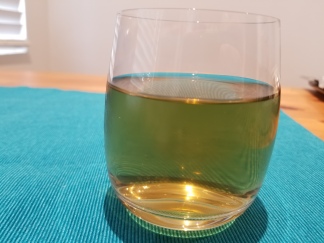 All that’s involved is boiling water and plucking leaves off stems.

I did spend a larger up-front cost on those dried clover flowers/leaves, but I can now make this recipe about 30 more times with the amount I bought.  Only other cost is mint leaves.  So overall, this is really not that expensive a recipe as long as you’re going to use all of the clover flowers in the end.