A review of Sinful Cinnamon Buns from the Unofficial Hunger Games cookbook.

“Peeta is still eating, breaking off bits of roll and dipping them in hot chocolate.” – The Hunger Games, Chapter 4

These buns took a long time to make, and I wouldn’t make them again for breakfast purely because of that.  If you’re having a late brunch you will probably have enough time, but otherwise I’d serve them as a dessert instead of a breakfast.

As with most breads, I started out by dissolving the yeast in water.  Meanwhile, milk was warmed over the stove and mixed with sugar, butter and salt.  Once cool, the yeast mixture was poured into the milk mixture, along with eggs and flour.

The dough was combined and kneaded for about 10 minutes, and then left to rise for 1 hour.

I actually did all of these steps the night before and left the dough in the fridge to rise overnight instead, but the dough had deflated somewhat by the next morning and was very solid/tough to work with.  So I would recommend doing all of the steps in one go if possible, instead of doing half the night before. 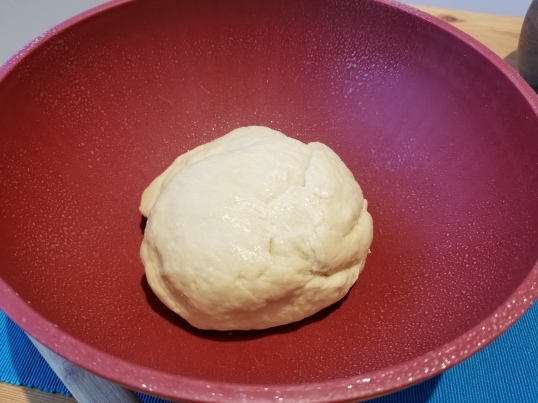 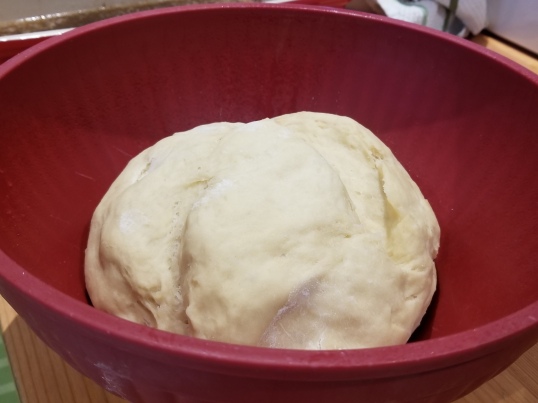 While the dough is rising, cinnamon and brown sugar were combined (yummy!) and some of it was mixed into a large amount of melted butter.  That melted butter was poured into the bottom of a greased baking pan.

The dough is rolled into a large, flat rectangle, brushed with soft butter, and the remaining sugar mixture is sprinkled over top.  Then the whole thing is rolled up, smothered in butter once again, and cut into pieces. 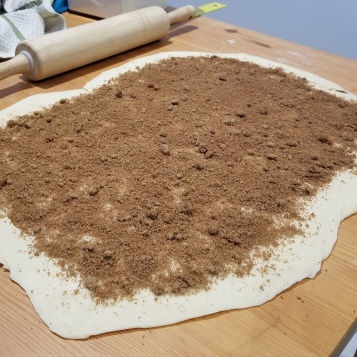 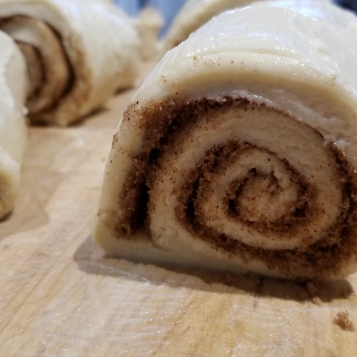 The pieces are laid in the sugar/butter mixture within the baking pan and left to rise another hour. 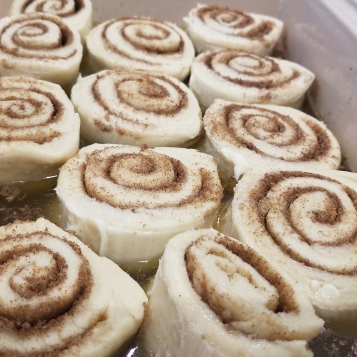 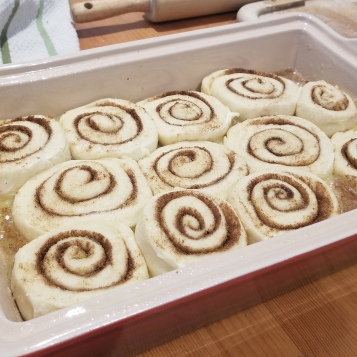 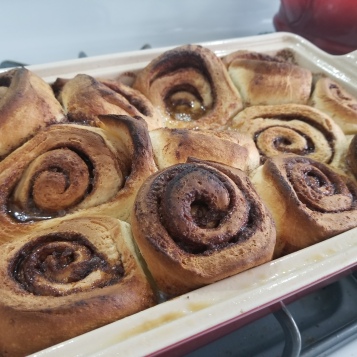 Finally, the buns were popped into the oven and cooked for about 30 minutes.  When they were ready to serve, they were placed upside down on plates and the sticky, buttery, sugar mixture at the bottom was drizzled over top.

These were very good – nearly perfect actually – but I did miss the sugary white icing that is usually found on the top of cinnamon buns.  The topping they use in this recipe is sweet and tasty, but just not the same.

These take a lot of patience and effort to make.  Expect to spend several hours preparing these!

You’ll probably need to buy more butter than what is already in your fridge, as well as dry yeast.  Other ingredients you might need to purchase include milk, sugar, flour, brown sugar, and eggs.

Even if you are not planning on eating all of the cinnamon buns right away, I recommend flipping them all upside down and moving them to a separate container before storing them.  If you leave them face down in the sticky sugar/butter mixture, they will get stuck there.

I learned that the hard way when I brought the baking dish of cinnamon buns to a friend’s house, and nobody could get them out of the pan without the tops ripping off and sticking to the bottom.