True Blood: Stake and Eggs & Did I Kiss Your Grits?

A review of “Stake and Eggs” and “Did I Kiss Your Grits?” from the True Blood Cookbook.

I have a pretty crazy month ahead of me, so instead of starting an entirely new cookbook this June, I’m going to be reviewing some new recipes from cookbooks we’ve already seen…

…starting with the very first cookbook I ever reviewed here: True Blood! 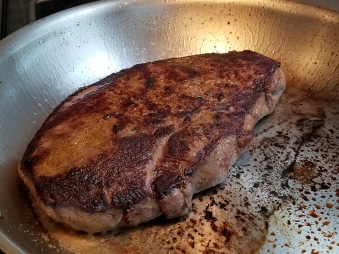 Steak isn’t something I’d typically serve for breakfast, but I googled this recipe to make sure I categorized it right and yes: it is a breakfast, not a dinner.

My husband was of course thrilled to hear that we’d be eating steak for breakfast!

The entire recipe was very simple, but you will need a pan that can go both over the stove and into the oven.

The steak is seasoned with cajun (or creole) seasoning, and then seared over the stove on both sides.  Then the steak, still in the pan, is put into oven to finish cooking.  I cooked it a bit longer than suggestion for medium instead of medium-rare.

The eggs were simply fried in butter over the stove until the egg whites were solid.  Mine were a little under-cooked, but they were good anyway.

And then everything was served with some Tabasco on the side.

My husband gives this a 9/10, but I thought it was a pretty simple meal, both in preparation and in flavor.  It tastes how you’d imagine: like steak and fried eggs.

I enjoyed it, but wouldn’t make it again.  I struggled to eat such a large amount of meat first thing in the morning!

This is a really easy meal to make.  Just be sure to monitor the steak and eggs while they cook.

The steak is of course the most expensive part of this meal, but one steak serves 4.  You may also need to pick up seasoning and extra eggs.

Did I Kiss Your Grits?

I have never had grits before.  The closest I’ve come to grits is the Breakfast of Mush I made last month from The Hunger Games cookbook, and they added cinnamon and brown sugar and other items that made it taste more like oatmeal than anything else.

This particular recipe, however, is more savory than sweet.  They add cheeses, garlic powder, and Tabasco sauce instead of cinnamon, brown sugar, and vanilla.

Reading the list of ingredients I was hopeful that I’d actually enjoy this one!

Unfortunately grits are not a very common meal here in California.  I was able to find yellow grits (aka Polenta), quick-cook white grits, and instant white grits, but the recipe specifically calls for, “White Regular Grits (Not Instant or Quick).

So I went with regular yellow grits instead.  From what I’ve read they have a slightly stronger flavor than white grits, but are otherwise more or less the same. 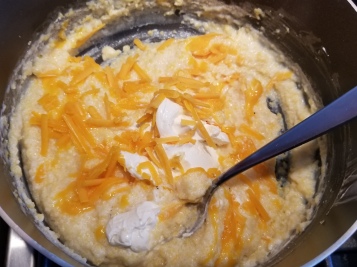 Now for the recipe: everything but the cheese was combined in a pot and simmered until it’s thick and creamy.  Then the cream cheese and cheddar cheese were added in and stirred until the cheese melted.  That’s it!

And the moment of truth, I take a bite….

Grits are not my thing, apparently, but I think it’s mostly a texture issue.  Frankly, I don’t like oatmeal or mushy bananas very much either.  Or maybe it’s just because it’s not something I’m accustomed to eating.

My husband gives this one a 7/10, so he obviously enjoyed it more than I did.

This is a simple and very quick meal to make, and only requires some monitoring while it cooks.

Grits are quite cheap, though they come in a large package meant for multiple meals.  In addition to grits, you’ll likely need to purchase cream cheese and cheddar cheese as well.  Other possible purchases include milk, garlic powder, and Tabasco sauce.

You can play with some of the measurements in this recipe to suit it more to your palette.  For instance, adding more/less of the cheeses or excluding the garlic powder and/or Tabasco sauce.

1 comments on “True Blood: Stake and Eggs & Did I Kiss Your Grits?”