A Song of Ice and Fire: 17th-Century Lemonsweet

A review of 17th-Century Lemonsweet from the A Feast of Ice and Fire cookbook.

“Arianne drew the child away.  ‘You must be hungry.  We have dates and cheese and olives, and lemonsweet to drink.  You ought not to eat or drink too much, though.'” – A Feast for Crows

I made the modern version of Lemonsweet a few months ago, and it was really good.  So going into this 17th-century version, I figured there was no way it could beat the last one we made.

This was definitely a unique recipe compared to most other lemonade recipes.  Particularly because it uses confectioner’s sugar instead of regular sugar.

Yes, you read that right: confectioner’s sugar.  I did a double take, too.

First, I zested an orange and lemon, and then I juiced a bunch of lemons and oranges into a bowl.  The sugar was added in, and the whole thing was mixed well until thoroughly combined.

The lemonade was then poured through paper towels into a pitcher to strain out the zest and seeds.  This was a very slow and somewhat painful process, and I went through quite a few paper towels.  This part of the process took the longest.

Once everything was finally strained into the pitcher, water was added and then the pitcher was put into the fridge until ready to drink! 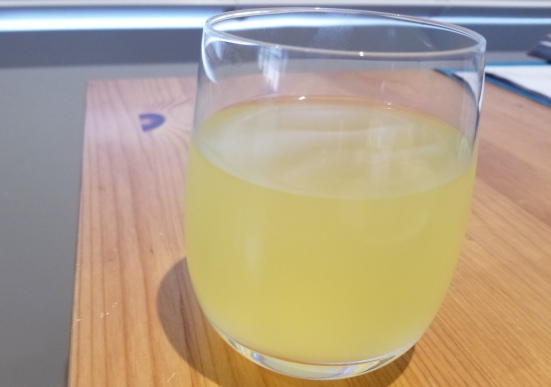 The lemon flavor was stronger than the modern version, but more subtle than most other lemonades I’ve tasted.  And it certainly is sweet, but not overwhelmingly so (at least to me).

I thought it was a really good mix – I only wish the recipe made more!

You will need to purchase lemons and oranges, and possibly confectioner’s sugar.  There is also the option to use sparkling water instead of still.

If you want more than 2-3 glasses, I would at least double the recipe.  It does not make very much.