A Song of Ice and Fire: Stuffed Grape Leaves

A review of “Stuffed Grape Leaves” from the A Feast of Ice and Fire cookbook.

“The kid had been roasted with lemon and honey.  With it were grape leaves stuffed with a mélange of raisins, onions, mushrooms, and fiery dragon peppers.  “I am not hungry,” Arianne said. . . After a while, hunger weakened her resolve, so she sat and ate.” – A Feast for Crows.

Let me save you a lot of time: you can skip this one.

The “45 minutes” prep is a lie!  Well…maybe not if everything is already minced, but mincing the onion, jalapeno, and mushrooms has to be done at some point beforehand and can take quite a while.

To start, the leaves take a long time to carefully unwrap from the jar.  They are all rolled together very tightly, and can rip easily.  So each leaf had to be carefully peeled from the rest.

Once that is finally done, the leaves are soaked in boiling water for about 30 minutes, and then rinsed in cold water.  This is to remove some of the brine.  The rinsing took longer than I expected, as well.

Then the onion is sauteed, followed by the addition of jalapeno, salt, pepper, and mushrooms to the pan.  Once it’s all cooked, it is combined with the raisins, ground lamb, and rice (another thing you need to prepare beforehand).

I selected the biggest of the grape leaves, and laid them flat.  About 1.5 tbsp. of the meat/rice mixture was put in the center, and then the leaves were folded over until the meat mixture was secure inside.  I continued this until there was no meat mixture left.

When they were all finished, some of the leftover grape leaves were placed on the bottom of a pot, and then a layer of the stuffed leaves were added.  Chicken stock was poured in and it was drizzled with lemon juice before adding another layer of leftover leaves on top of the stuffed ones. 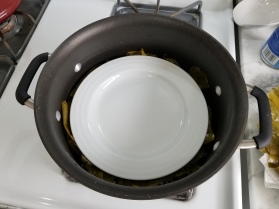 I put a plate on top of the leaves to keep them down, added the lid to the pot, and simmered the whole thing for about 45 minutes until the lamb was cooked through.

I forgot to take a picture of the final product.  I took a small bite with the intention of photographing the inside of the leaves, but quickly spit it out and tossed it. 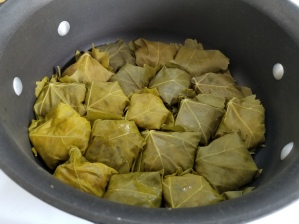 I did not like this recipe at all.  I can see some appeal if you really like lamb, though.  That’s mostly what it tastes like.  We never had a lot of lamb at our house, so it’s not something I’m accustomed to.  Combined with the grape leaf flavor, this one really turned me off.

Maybe it would have been tastier with more spices added.  Mostly it tasted like lamb and rice, and even thought there was jalapeno in there I didn’t taste it at all!

Difficulty-wise it wasn’t too bad, but it does take a VERY long time to make this.  If you include prep, I probably spent about 4 hours on these.

The most difficult parts would be separating the leaves and mincing the vegetables.

…and for me, the most difficult of all was trying to actually swallow one of these!

Don’t make this one.

1 comments on “A Song of Ice and Fire: Stuffed Grape Leaves”