A Year of Holidays: Fourth of July Summertime Cookout (Part 1)

A review of Homemade Lemonade, Baked Beans, My Favorite Pasta Salad, and Peach Cobbler from The Pioneer Woman Cooks: A Year of Holidays cookbook.

This year for our Fourth of July celebration, I tried four of the recipes included in the “Fourth of July” section of the “The Pioneer Woman Cooks: A Year of Holidays” cookbook:

The Lemonade and Pasta Salad links will you take you to the recipe on The Pioneer Woman’s website.

I prepared anything I could yesterday to make this morning less stressful.  For the lemonade, all of the lemons were squeezed and the syrup was made.  I chopped the onion and peppers for the baked beans.  And for the pasta salad, the pasta was cooked, the cheese was cut into cubes, and the dressing was made.

This morning I started with the pasta salad, since it needs to sit in the fridge for at least 2 hours anyway. 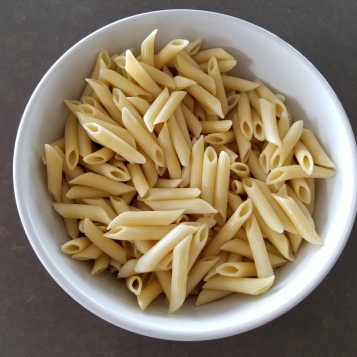 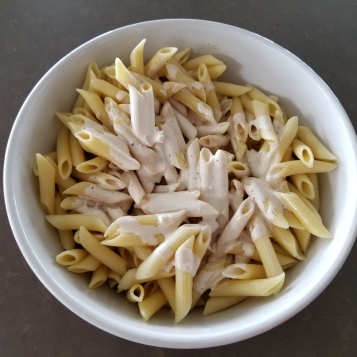 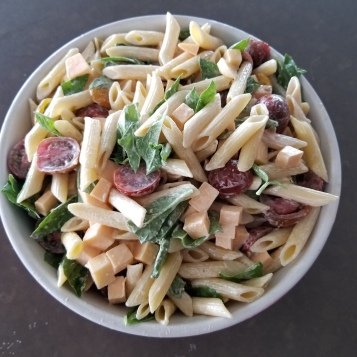 Since the dressing was already made and the pasta was already cooked, it was really just a matter of combining the pasta, dressing, tomatoes, cheese, and basil together and mixing until thoroughly combined.  Then the bowl was covered with saran wrap and kept in the fridge until people began arriving.

Next were the baked beans.  I chopped up some bacon into small, bite-sized pieces and cooked them over the stove with the onion and peppers.  The rest of the ingredients, except for the remaining bacon, were then tossed in and cooked until bubbly.

Once the mixture was bubbling, the whole thing was poured into a baking dish and topped with bacon before being put into the oven for 2 hours.  I ended up with more beans than could fit in my largest dish, so I split it into two separate baking dishes.

About an hour before the party I started on the peach cobbler.  The first step was to slice up all of the peaches and toss with sugar and flour.  It was set aside while I made the dough.

The dough was similar to most doughs: mix dry ingredients together, cut in the butter, and then add the milk/egg mixture.

The peaches were then laid into a baking dish, and the dough was ripped off in chunks and placed on top of the peaches.  Then the whole thing was sprinkled with sugar before being cooked in the oven.

Once people started arriving I made the lemonade.  First I poured the squeezed lemons through a strainer.  I had to rinse the strainer a few times, though, since it kept getting clogged.

Then the syrup is added before the entire container is filled to the top with ice.  The last step is adding water and mixing it all together. 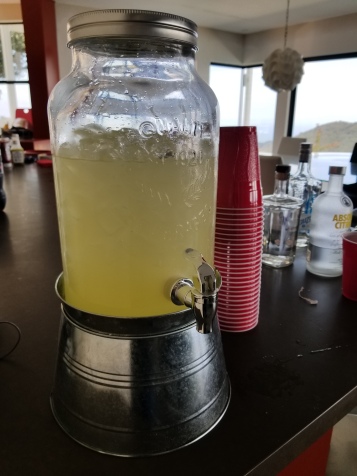 I had enough lemon juice and syrup to make 2 batches of lemonade – or if you have one GIANT vat you can throw it all in one, but our lemonade dispenser was too small to add it all in the first go.

The baked beans were definitely my favorite, followed very closely by the lemonade.  I really enjoyed the pasta salad as well, but was a little disappointed by the cobbler.  I found it to be a little bland.

That being said, several people came up to me to say how much they enjoyed the cobbler, so maybe it’s just me!

The beans were absolutely perfect!  Everything in it worked very well together, and it was the hit of the party!

The lemonade was also really, really good.  My husband thought it was a bit too sugary at first, but the ice did water it down a bit later on.  He still gave it 10/10 even though he found it a tad too sweet at first.

The pasta salad had a nice smoky flavor because of the cheese and chipotle sauce.  Pasta salad has never been a favorite, but this is probably the best one I’ve tried so far!  It was surprisingly good!

The peach cobbler was disappointing for me.  I thought it was too bland, though some people at our party really did like it.  One of my friends thought I had used canned peaches, to give you an idea of how it ended up.  And another suggested I add sugar to the top, even though there already was sugar sprinkled over the whole thing.

There are a ton of steps to make all of these recipes, but the steps themselves are not difficult.

I think the beans took the most amount of time and work, but were definitely worth it.  The peach cobbler came in second in terms of difficulty because of the dough preparation. 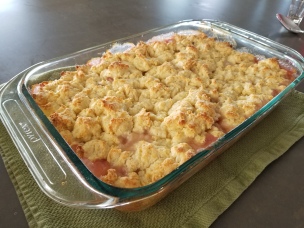 As with most of the meals in the cookbook, this one really adds up.  The lemonade is the cheapest, as it just requires a bunch of lemons and sugar.

The peach cobbler was the next cheapest, where possibly the only ingredient you’ll need to buy are the peaches.  It also includes sugar, flour, baking powder, butter, milk, and egg.

The most expensive was the baked beans, where you’ll need to buy bacon, a bell pepper in each color, an onion, and four giant cans of pork-and-beans.  You may need to purchase some of the other ingredients as well (brown sugar, barbecue sauce, apple cider vinegar, mustard…)

If you find the lemonade to be too sweet, you can add less of the syrup or more water to dilute it a bit.

You can probably reduce the baked beans recipe by about 1/4.  As it is right now, the recipe makes too much to fit into 4 quart dish.  It might fit into a 5-quart dish if you have one.

6 comments on “A Year of Holidays: Fourth of July Summertime Cookout (Part 1)”