A review of Vee’s Homemade Bread from the Orange is the New Black cookbook.

As far as I can remember, I don’t think we ever see Vee make bread on the show.  But in the recipe, her write-up suggests it’s a calming activity for her to do when the world around her is falling apart (probably from chaos she’s created herself).  She calls making bread a “meditation on nurturing.”

This was a fairly simple recipe to make as far as bread goes, especially since I was able to use my electric mixer with the dough attachment.  If you don’t have one, it’s going to take a bit longer to make and require more muscle.

To start, all of the ingredients and some water are tossed into the mixer and blended until it creates a rough dough.  The dough rests for about 10 minutes before round 2 of mixing.

Then the dough is placed in a covered bowl to rise for an hour before being moved to a loaf pan to rise yet another hour.

So far it’s taken about 2.5 hours, but the actual work itself has been minimal!

Finally we toss the loaf in the oven to finish cooking.  About half way through you’ll need to add a tent of tin foil over the loaf.

The resulting bread was very good!  I think I could have taken it out a few minutes early, because it was just a little bit dry, but otherwise this was great! 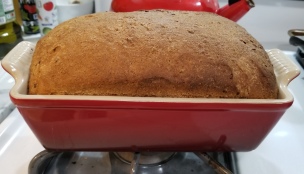 This was a nice, fluffy bread with a somewhat rustic flavor, because of the whole wheat flour that was included.  Very tasty, and not an overwhelming flavor!

If you have an electric mixer with dough attachment, this will be a very easy recipe to make.  Just toss everything in, mix, and let it rise as per the instructions before putting it in the oven.

If you don’t have an electric mixer, then you’ll have to knead and mix by hand which will take a lot more time and effort.

Flax seeds and/or yeast may be the only thing you need to purchase for this one, depending what’s already in your cupboard.  Other ingredients include olive oil, honey, whole wheat flour, all-purpose flour, salt, and yeast.