A review of Crazy Eyes’s Dandelion Salad from the Orange is the New Black cookbook.

“Dandelion” is the nickname affectionately given to Piper Chapman by Suzanne Warren (aka Crazy Eyes), her unwanted admirer.  While they’re in the yard, Crazy Eyes catches up with Piper, recites an original poem that she wrote, and then picks a few dandelions and tells Piper:

“I’ma call you Dandelion, cuz they’re pretty and yellow just like you.”

Then she grabs Piper’s hand and attempts to give her the dandelions before Piper runs off. 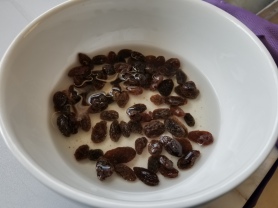 So…how could I not make Dandelion salad?

Be sure to read the ingredients carefully on this one.  You’ll need to toast the walnuts and let the raisins soak in water or wine for an hour before you even start assembling this salad.

I didn’t toast the walnuts, but I did soak the raisins.

Once you have your ingredients ready, the first step is to make the dressing.  Simply mix the goat cheese, milk, and apple cider vinegar together until it’s a good consistency.

To assemble the salad, start by ripping up your dandelion leaves.  Then add in dressing and toss the salad.  Finally, add the walnuts, raisins, and salt and pepper and toss one more time.

The resulting salad was quite nice!  My dandelion greens were still wet, so the dressing did get watered down a bit, but all in all the salad turned out better than I was expecting.

While I’m not a huge fan of dandelion leaves, the dressing worked very nicely with this salad.  In fact, the dressing was the best part in my opinion – particularly the goat cheese! 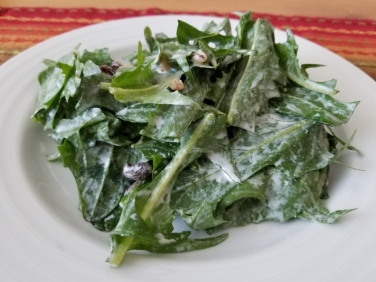 The recipe is really just mixing things together.  It’s not difficult at all.

You’ll need to purchase dandelion leaves and goat cheese.  You may also need to buy some milk, apple cider vinegar, raisins, and walnuts.

If you need to wash your leaves, make sure they’re dry before adding on the dressing.