Orange is the New Black: Huevos with Spinach & Chicken Enchiladas

A review of “Miss Rosa’s Huevos with Spinach” and “Blanca’s Chicken Enchiladas (with Chipotle Tomatillo Sauce)” from the Orange is the New Black Cookbook.

As far as I can tell, this recipe is not actually from the show.  The message in the recipe from Miss Rosa, our favorite terminally ill inmate, says it was a beloved breakfast of hers prior to Litchfield Penitentiary.

This is a pretty easy breakfast to make, but I recommend you make sure you have all of 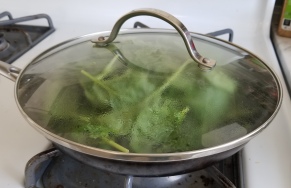 the ingredients next to you and ready to go so you can move quickly.

First, the garlic is sauteed in the skillet before adding the spinach and cooking it, covered, until the spinach wilts.

I burnt the garlic almost immediately, so it might be helpful to start off at a lower temperature 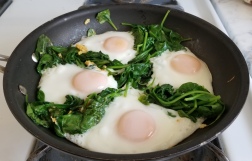 than what’s listed in the recipe.

Then four holes were made in the spinach, and the eggs were cracked into each hole and cooked until they’re done.

Finally, the eggs were moved to plates and it was all topped with lime juice, oregano, and a sprinkle of Parmesan cheese.  The cracked eggs actually made the spinach stick together, so it was really easy to move everything from the skillet to plates! 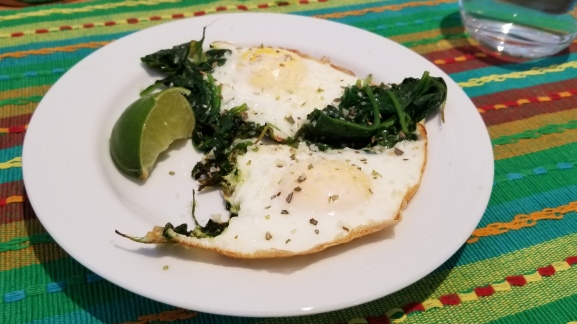 While this was a tasty and healthy breakfast, the spinach flavor was too overwhelming to me.  And I found the lime flavor to subtle, even though I squeezed a lot on there.

At first bite, I actually didn’t like it very much at all, but it grows on you after bite 3 or 4!  And the Parmesan is a really nice addition.

You’ll need to move quickly, so I recommend having your ingredients next to you and ready to go, but the steps themselves are actually quite simple.

The main ingredients are spinach, eggs, and garlic…and you probably already have the eggs and garlic in your fridge.  The toppings include lime juice, oregano, and Parmesan cheese.

You can add quite a bit of spinach, probably more than you think, since it wilts so much.  So don’t be stingy!

This is another recipe that I don’t think is actually in the show itself.  In Blanca’s write-up, she talks about how she’s always been pushing limits, including the time she was 5 and her older sister dared her to drink an entire can of enchilada sauce…which she loved.

I was both excited and nervous for this recipe.  I LOVE enchiladas, but I’ve never made them before and they look complicated.

Turns out – not so complicated after all!  Just a little

The first step was boiling the chicken thighs, letting them cool, and then shredding them with your hands into bite-sized pieces.

While the thighs were boiling, I prepared the tomatillo sauce.

First, the husked and washed tomatillos were broiled in the stove along with the garlic cloves.

My broiler isn’t working (for some reason the knob won’t turn that far), so I cooked them at 500 degrees, my highest setting.  Based on the instructions, they should have been black all over, but mine were still quite green.  No matter – the flavor is still there! 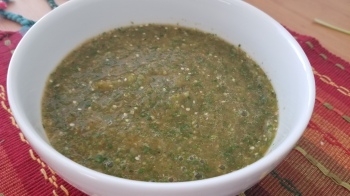 Then the garlic, tomatillos, broth, cilantro, and salt are all blended together in a food processor to finish the sauce.  I forgot that I was cutting the recipe in half at this stage, so I accidentally added more liquid than I should have, but I blotted out a lot of it with paper towels.  Even so, I think it was a bit more liquidy than it was supposed to be.

When the chicken is all shredded, it’s mixed with cheese and a little bit of broth.  Now we’re ready to assemble the enchiladas! 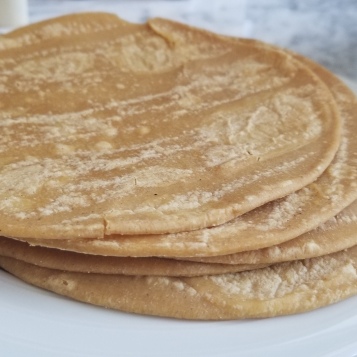 First, some of the tomatillo sauce is poured into the bottom of the baking dish.  Then the tortillas are heated over the stove before being filled with the chicken filling and wrapped up.  They are placed carefully, with the seam-side down, into the baking dish so that they are all squished together in there. 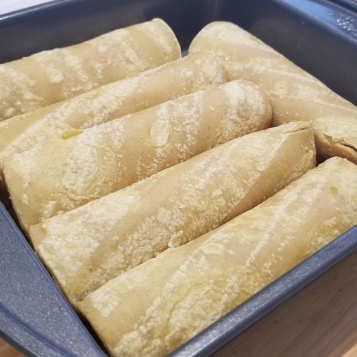 Finally, they’re topped with the remaining tomatillo sauce and some cheese before going into the oven.

I LOVED this recipe!!!  My husband gives it a 9 because he prefers chicken breast meat to chicken thigh meat, but to me this was perfect.

And I especially loved the sauce!  It has a little bit of kick to it, but not too much.

While there are quite a few steps, nothing is overly challenging about this recipe.  Just be sure to give yourself enough time and pay close attention to the steps.  They do a great job of describing exactly what should happen in this one.