A review of Gloria’s Chunky Oatmeal from the Orange is the New Black cookbook.

This oatmeal isn’t in the show itself, but there is a stint where Gloria is in charge of the prison’s kitchen, so it makes sense that she’s made oatmeal more than once for all of those ladies!

Now, full disclosure: I don’t like oatmeal.  To me, it’s just a bland bowl of mush.  When I was a kid I could stomach only two types: Peaches & Cream, and the one with hatching dinosaur eggs.  Over time, I stopped eating those, too.

But after tasting this oatmeal, my mind might be changed!

First, water is brought to a boil before the oats are added in.  I was sure to underline and highlight the “instant” part on the grocery list I sent my husband, yet somehow I still ended up with “quick-cook” instead.  No matter, though – they seemed to cook well. 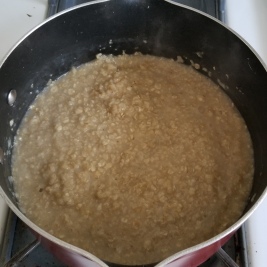 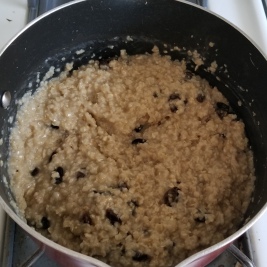 Once the oats thicken, raisins and cinnamon are added, followed by evaporated milk, and finally butter and brown sugar.

That’s it, the oatmeal’s done!

I have hated oatmeal for most of my life, until I tried this recipe.  I’m sure the loads of brown sugar and the sweet coconut on top played a big role in my liking this, but even 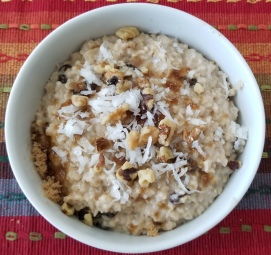 the texture didn’t bother me this time!

I recommend having all of the ingredients measured out and ready to go before you begin cooking, but the steps themselves just involve adding more to the pot and stirring.

You will need to buy instant oats, raisins, evaporated milk, walnuts, and coconut flakes.  Other items, which you probably already have, include cinnamon, butter, and brown sugar.

The good thing, though, is that these ingredients all come in bulk.  So if you’re planning to make this recipe more than once, it ends up coming out pretty cheap in the end!