A review of R2-D2 Treats from The Star Wars Cookbook 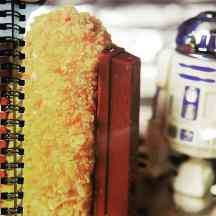 I couldn’t wait to make these cute little R2-D2 Treats!  They involve only 4 ingredients: white chocolate chips, peanuts, a banana, and a Kit Kat bar.

First I lined a baking sheet with wax paper, chopped the peanuts, and broke apart the Kit Kat bar.  The peanuts were put into a bowl, and the Kit Kat pieces were cut in half and then put in the fridge until I was ready to use them…because our house is a freaking sauna right now, and they would melt if I left them out.

Next, the chocolate chips were melted and the banana was cut into four equal pieces. 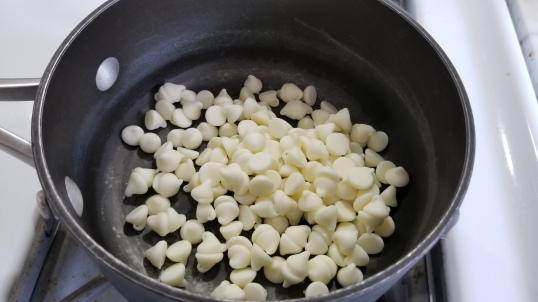 Once the chocolate was melted, using tongs I dipped the banana into the chocolate, then into the nuts, and then placed them carefully onto the wax paper.  Finally, the Kit Kat bar legs were added. 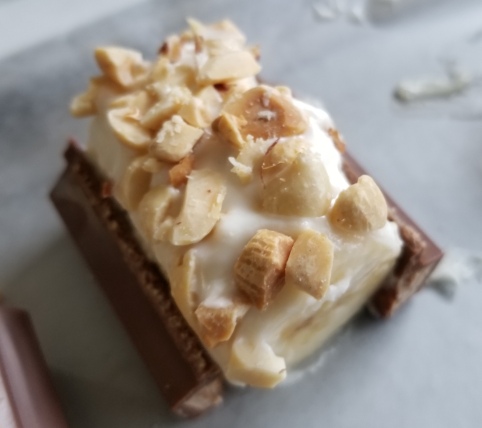 Then they go into the freezer until hardened.

They did not end up looking as good as they do in the cookbook, which was disappointing, but they still did resemble R2-D2 somewhat.  Maybe if I chopped the peanuts more they’d look closer.

While these were a little bit awkward to eat, and kept falling apart with each bite, they were actually very good.  I mean…it’s essentially just banana, chocolate, and nuts.  If you like those three things, you will like these!

Rolling the bananas around in the melted chocolate was fine, but moving them with the tongs from the chocolate to the nuts to the tray had its difficulties.  The chocolate would come off on the tongs, wherever they touched, and if the nuts fell too far down the sides of the banana it was difficult to get the Kit Kat bars to stick. 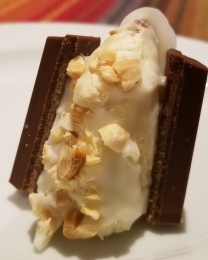 Prepare EVERYTHING beforehand, despite what the recipe says, so that you’re ready to start dipping the banana pieces as soon as the chocolate is off the stove.  The chocolate thickens as it cools, making it more difficult to work with.

Also, the more you chop up the peanuts the better it will look.  What I probably should have done is press extra peanuts into the top of the banana once the Kit Kat legs were already on.