A review of Princess Leia Danish Dos from The Star Wars Cookbook.

Unlike her hairdo, these are edible.

They were actually not as tough to make as I thought they would be – mostly because refrigerated pizza dough is so much easier to work with than homemade!

The first step was to melt the butter over the stove, but I ended up melting it in the microwave instead since it’s easier, quicker, and involves less clean-up later.  Just make sure you melt it in small bursts at a time, otherwise it could explode all over your microwave!

Then the dough is unrolled onto a lightly floured surface and brushed with the melted butter.  Sugar and cinnamon are combined in a bowl and sprinkled over top of the butter.  And then the dough is rolled up and the edges are pinched closed with your fingers. 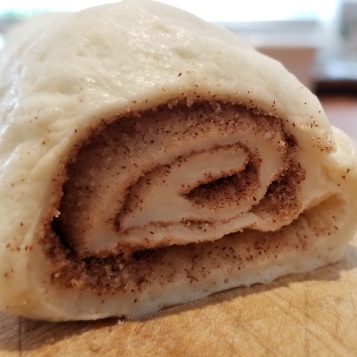 Then the log of dough is cut into 1-inch slices and the slices are placed onto a greased baking sheet before being popped into the oven for about 20 minutes (I took mine out early since they browned about 5 minutes early).

Meanwhile, a little bit of milk is added to the confectioner’s sugar to form an icing.

Once the buns are out and cooled, brush with the icing and serve! 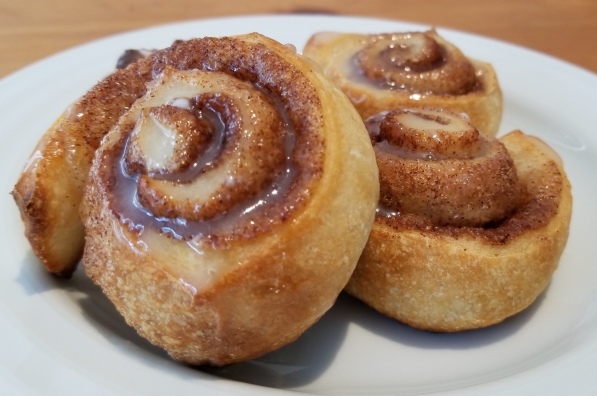 These were really good!  The icing helped, of course 😉  They’re very similar to cinnamon buns. 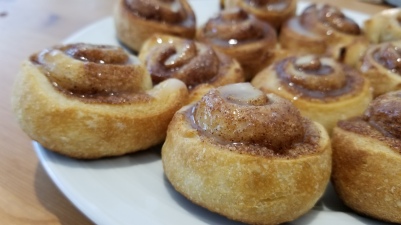 These weren’t nearly as challenging as I thought they would be, and I think a big part of that is using refrigerated dough instead of homemade.

You will need to purchase refrigerated pizza dough, but you may already have the rest: flour, butter, sugar, cinnamon, milk, confectioner’s/powdered sugar, and vanilla extract.