A final review of “The Star Wars Cookbook: Wookiee Cookies and Other Galactic Recipes” 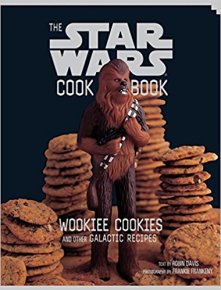 This cookbook is a bit different from the ones I’ve reviewed before in two ways:

The fact that this cookbook is for kids makes a big difference.  The food is generally on the simpler side, both in terms of assembly and flavor.

This cookbook definitely has the easiest recipes to make out of the ones I’ve tried so far.  It does include several recipes with dough, as well as cooking over the stove and/or in the oven, but they make note when parental assistance will be required for a particular recipe.

Since the recipes are simple, they also include fewer ingredients making this cookbook one of the cheaper options.  Most recipes only have about 5 or so ingredients, which is easy to keep track of!

The instructions are very clear and detailed.  They do a pretty good job of making sure kids won’t misunderstand the information.  You will need some special equipment, like an electric mixer, but nothing outrageous.

The food was all good, and I didn’t have any recipe flops this time around!  The food included will appeal to most children, but I did find some recipes to be a bit bland.  For instance, the Tie Fighter Ties are just hot dogs wrapped in dough…not very exciting.

Since this cookbook is a parody, the recipes are not true to the films.  Instead, they’re play-on-words or look-a-like recipes.  For example, R2-D2 Treats are supposed to look like little R2-D2s, and the Han-burgers almost sound like “Hamburgers.”

This was a cute cookbook, but in the end it’s not a favorite of mine.  Overall, the recipes are a little too bland for my taste and none of the look-a-like recipes turned out well for me.  That being said, I will be keeping a few favorites!