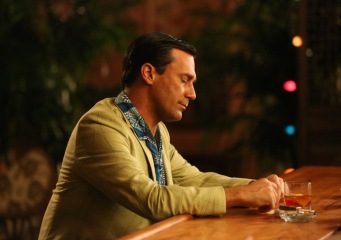 It’s only appropriate to start off testing recipes from this cookbook with the very first food or beverage ever mentioned on the show: the Old Fashioned.

This is Don’s preferred drink of choice, so we see him drinking it often throughout the series, but the first time it’s mentioned is in the very first scene of the very first episode while Don is jotting down advertising ideas on a napkin.

The recipe itself came from the Grand Central Oyster Bar.  They give you the option of using either rye or bourbon; I picked rye since it’s Don’s favorite!

To start, we have to “muddle” a few ingredients: orange, maraschino cherry, sugar, Angostura bitters, and some soda water. 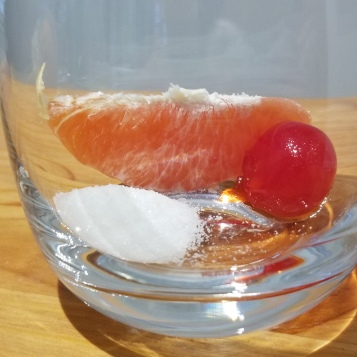 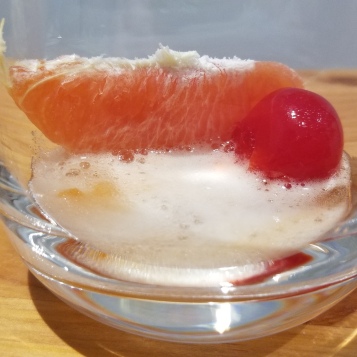 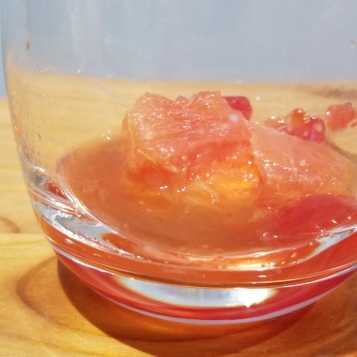 Once the ingredients are muddled, rye or bourbon is added and you have the option of serving on the rocks…which of course I did in this insane heat. 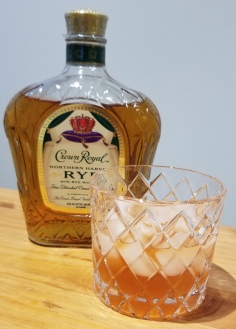 I wasn’t sure if I was supposed to drink straight from the “muddle” cup, or pour it into a separate glass without the cherry and orange on the bottom.  Since it’s just not right to add ice afterward, I figured it made sense to pour into a separate cup…

I was wrong.  I figured it out too late, though, after I saw the picture in the center of the cookbook.

Either way, this still tasted great and the orange and cherry flavor would have been mixed in anyway given the way I destroyed them and ripped them up.

I love me my rye!  This was really good, but a tad too strong for me.  I really liked the sweetness that was added from the cherry and orange, though!

Only minor effort is involved when “muddling” the ingredients.

You will need to purchase an orange, maraschino cherries, Angostura bitters, rye (or bourbon), and soda water.  Sugar is also involved, but you probably already have that! 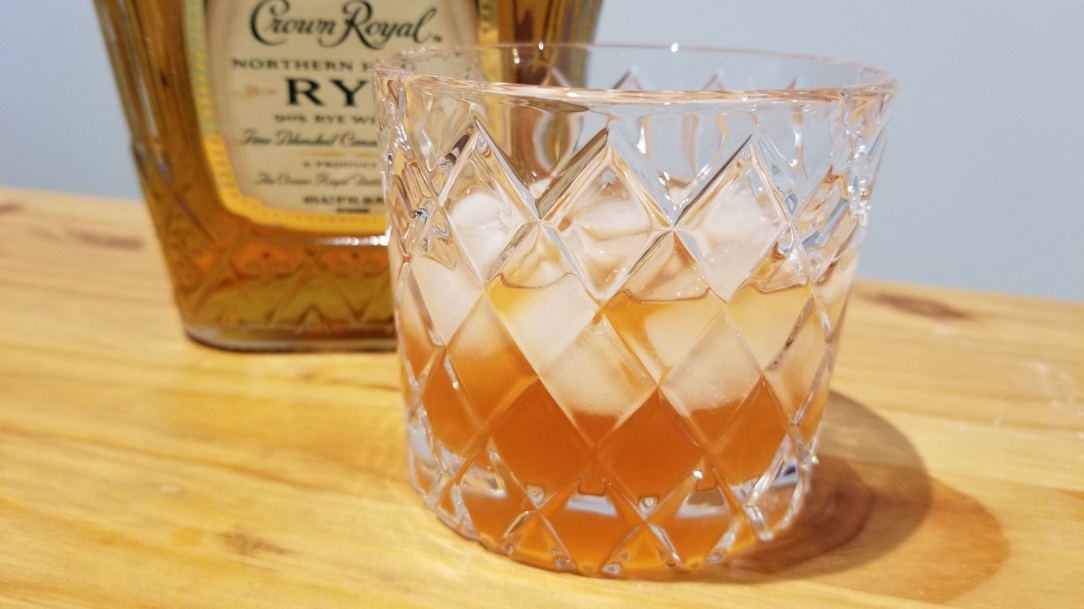 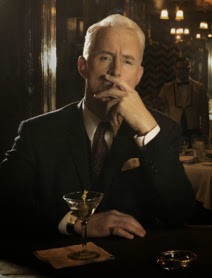 The weird part about this recipe was the one glaring omission: olives!  A martini with no olives?  WHAT?!

And I don’t have any martini glasses, so we used a wine glass…I know, blasphemy!

To start, the glass is filled with water and ice cubes to keep it cold while the drink is mixed.

Then it’s just a matter of combining dry vermouth and gin, and pouring it into the cold glass.  Don’t forget to pour out the ice water beforehand, of course!

This is not the drink for me.  It was very strong, and I don’t like gin.

Fun side story: the reason I don’t like gin is my nonna (grandmother).  While visiting when I was a kid, she poured gin into a water bottle that she kept in our fridge.  And then she flew back to Italy.  Little 9-year-old me went into the kitchen for some breakfast before school, saw a bottle of water in the fridge, and downed it.  I remember expecting that cool, fresh feeling you get as it works its way through your body, but was instead met with an intense burning sensation.  Ever since then, I’ve disliked gin unless it’s hidden among other alcohols or mixers.

So freaking easy, even a child could do it.

That’s not a suggestion; please don’t ask your child to make you this drink!

You’ll need to pick up some dry vermouth and gin.  That’s it, but they are pricey items!