A review of Boba Fett-uccine from The Star Wars Cookbook. 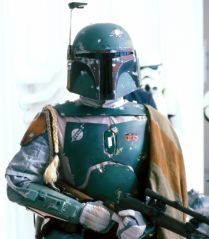 In the past I’ve really only had my fettuccine with a cream sauce, but in this recipe it seems to be cook’s choice!

Broccoli, cauliflower and zucchini are cut up first, and then boiled in water for about 4 minutes until tender.  Meanwhile, I brought another large pot of water to boil in preparation for the pasta.

The veggies are returned to their saucepan, nondescript “bottled pasta sauce” is added in, and the sauce with veggies is heated over the stove. 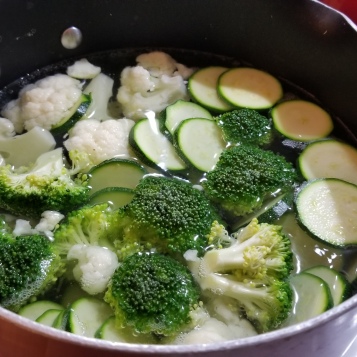 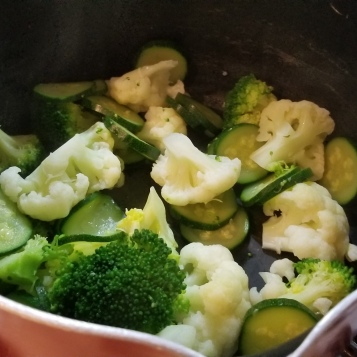 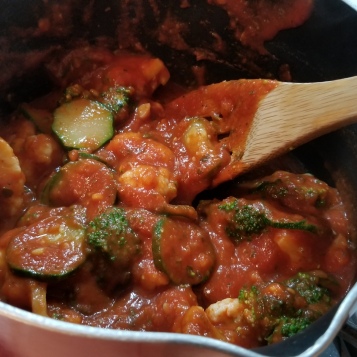 When I think pasta sauce, I usually think “tomato.”  But when I think fettuccine, I think “cream” or “alfredo.”  I bought tomato sauce in this case, since it seemed like it would work better with the cauliflower.

The fettuccine is cooked according to the package directions and drained.  The pasta is then scooped onto plates and topped with the pasta sauce and some Parmesan cheese. 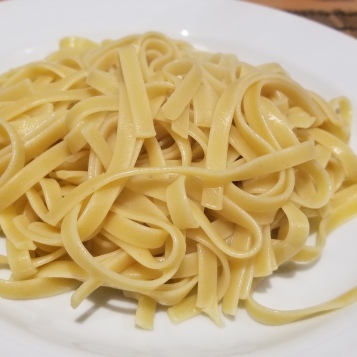 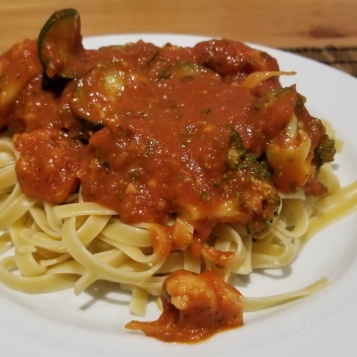 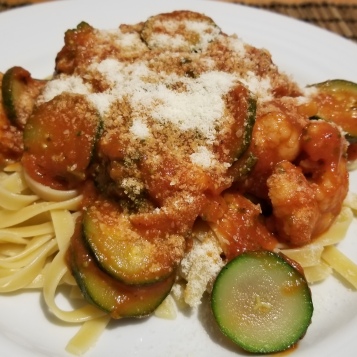 I could have done without the cauliflower in this pasta, and since the sauce is store-bought it is only as good as the one you buy.  It’s really not all that difficult to make a homemade pasta sauce instead of store-bought, and it would have tasted better.

Also, maybe this is me being a little “hoity-toity” about my pastas, but a heavy/chunky pasta sauce like this does not belong on thin noodles like spaghetti or fettuccine.  This would have done better on penne, or another heartier noodle.  I realize they couldn’t really call it “Boba Fett”-uccine if they didn’t use fettuccine, but there are other pasta sauce options that would still fit the name.

All that being said, this recipe is a good way to get kids to eat their veggies!

For adults, this would be among the easier of recipes.  For kids, it does involve chopping up vegetables and dealing with boiling water and steam.  Overall, though, it’s a pretty simple and straightforward recipe.

You will need to purchase broccoli, cauliflower, zucchini, fettuccine, and “bottled” pasta sauce (I’m sure canned will produce the same result).  You may need Parmesan cheese as well.