A review of Obi-Wan Kebabs from The Star Wars Cookbook 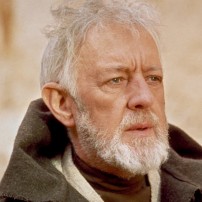 These kebabs are named after the famous Obi-Wan Kenobi, Luke’s mentor.  And aside from the corn, they’re quite simple to make!

First and foremost, make sure you soak your skewers at least 30 minutes in advance!

They suggest starting with the chicken, but since chicken is full of bacteria that can make you sick, I started with the vegetables and cut up the chicken last.

After preheating the oven, the zucchini and corn is cut into rounds, the potatoes are cut in half, and the chicken is cut into cubes.

The ears of corn were a real pain to cut, and I had to get my husband to do it.  He didn’t want to cut them all because he found it quite difficult as well, so we gave up early and only chopped up 2 of the 3.

Next, the food is pushed onto the skewers starting with the corn.  It took me about 5 minutes to finally get the single piece of corn on my skewer, and my husband snapped his skewer in half attempting to do so.  We decided at this point that two skewers was enough.  And you’ll note in the photos, only one piece of corn is on each skewer.

Once everything is skewered, they’re brushed with oil and cooked in the oven for about 30 minutes until the chicken is cooked through. 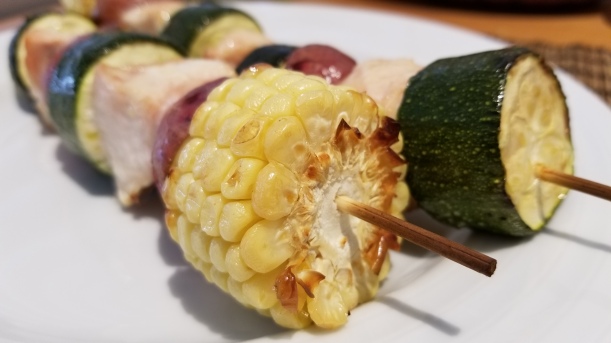 My husband and I both really liked the corn on these kebabs, but the potatoes were still a bit hard and the zucchini was particularly soft and mushy.  The flavor was good, but we wouldn’t make this again. 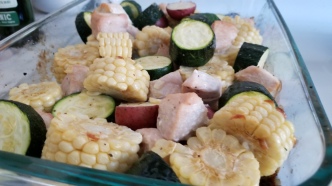 The ears of corn is what makes this recipe difficult, otherwise I’d say it’s easy.  But chopping up the corn and then attempting to thread it onto a skewer was extremely frustrating.  Both my husband and I gave up on it.  After making 2 skewers we just put the remaining chicken and veggie chunks into a baking dish and cooked it in there.

I know this recipe is aimed toward children, but the corn was difficult for two grown adults to handle.  If making this recipe with kids, I would recommend eliminating the corn altogether.