A review of Bossk Brownies from The Star Wars Cookbook 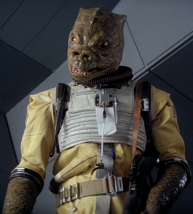 I had to pick something special today to celebrate my 1-year anniversary, so I landed on brownies!  And these aren’t your average brownie…they have butterscotch chips in them 😀

Bossk is a rather nasty-looking bounty hunter that first appears in The Empire Strikes Back.  Darth Vader summons him to track down the Millennium Falcon.

The dry ingredients are mixed together first in one bowl, and the butter and sugar are combined in another.  Then eggs and vanilla are beat into the butter/sugar combination, followed by the mixed dry ingredients.

Then everything is smoothed out in a square baking tray and popped in the oven until a toothpick comes out clean. 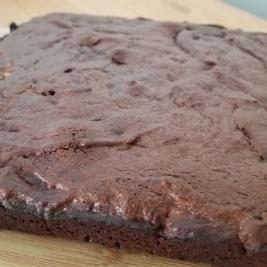 The brownies are left out to cool completely before cutting them up.

These were so good!!!  I was worried that I overcooked them a little bit, since the edges were a little too blackened.  And yeah, the brownies were a bit dry and overcooked but they still got 10/10, so obviously they’re good.

The butterscotch chips were of course my favorite part!

These are easy to make as long as you can use an electric mixer.

You probably have most items already: flour, cocoa powder, baking powder, salt, butter, brown sugar, white sugar, eggs, and vanilla.  The only thing left to buy if you have these items already are the white or butterscotch chips!

Take your butter out early to make sure it’s room temperature before you mix it.  Trust me, it will make your life a lot easier.