A review of Morning Oat Porridge from “An Unexpected Cookbook: The Unofficial Book of Hobbit Cookery”

This recipe actually suggests using leftover Stewed Apples & Prunes (another recipe in the book) as a topping, but since I haven’t made that yet I decided to go with one of their other suggestions: brown sugar and/or cinnamon.

Porridge, according to this cookbook, was a generic term for any boiled grains and would have consisted of oats, wheat, semolina, bulgur, or barley in Tolkien’s day.  This particular recipe calls for oats, though.

Step 1: Toast your grains.  I actually haven’t done this with other recipes before, and it turned out quite nice.  Just melt butter and cook the oats in it for a couple of minutes. 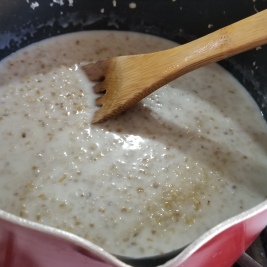 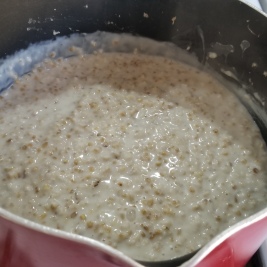 Step 2: Boil the oats.  Self-explanatory, but the recipe does call for some salt added in addition to the boiling water.  Leave them to simmer about 35 minutes.

Step 4: Ladle into bowls, top with your topping, and serve! 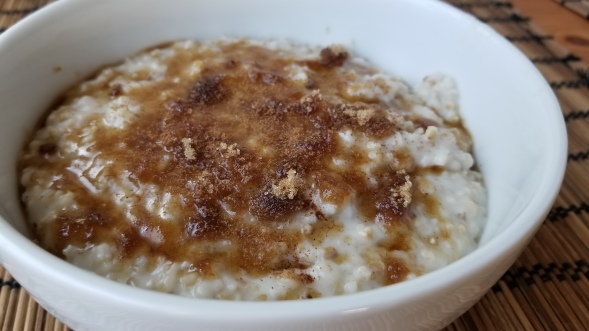 The recipe calls for “Porridge Oats” which, at least here in LA, are not a thing.  I opted for Steel-Cut Oats since they’re most used in porridge/oatmeal.

I thought the oats could have been a bit softer, which means cooking a bit longer.  But the taste was pretty good.  The brown sugar and cinnamon topping was the best part, of course!

Very little effort is involved here.  If you can work a stove, you’ll be fine.  This is not rocket science.

While I’d like to say this is definitely a cheap recipe, it really depends on what you already have in your kitchen and what toppings you choose.  I already had butter, steel-cut oats, brown sugar, and cinnamon, so really milk was my only cost.