We have friends who host Thanksgiving every year, so I did not be making ALL of Ree Drummond’s Thanksgiving recipes this year (there are TONS), but I made four of them!

And the best part?  You can get ALL of these recipes for free on her blog:

I actually started cooking on Tuesday by preparing the pie crust for the Caramel Apple Pie and chopping up pecans for the sweet potatoes.  All that was required for the crust was combining ingredients thoroughly and freezing the dough until I’m ready to use it.

On Wednesday I started with making the Caramel Apple Pie.

The dough didn’t thaw in the 30 minutes the cookbook claimed it would, it took more like an hour.  So I started with peeling apples and assembling the rest of the pie. 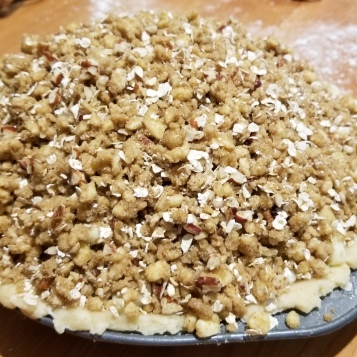 When the pie comes out, caramel is drizzled overtop and it’s left to cool on the counter overnight.

I also started preparations for the dressing.  First I made the cornbread, which was also more or less just combining ingredients and baking it, though it did require the bread to be cooked over the stove briefly first.  I also cut up the cornbread and other breads into cubes to dry out overnight, and diced onion and celery in preparation the big day! 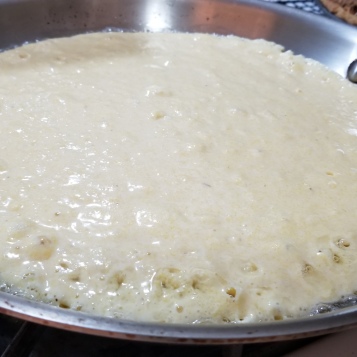 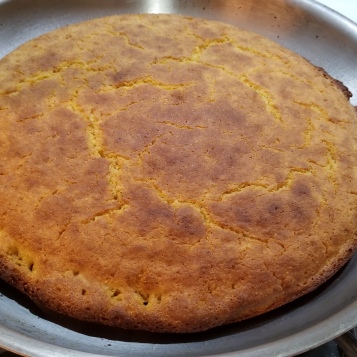 The first thing I did was chop up bacon and trim the ends of the green beans for the Green Beans and Tomatoes, and bake the sweet potatoes.

While the sweet potatoes baked, I prepared the dressing.  The onion and celery were cooked over the stove in butter, and then chicken broth, basil, thyme, rosemary, parsley, and salt and pepper are added and cooked.  The now-dried bread goes into a large and it’s tossed with the soup/veggie mixture until everything is combined and the bread is moist.  Then it’s all tossed into a casserole pan…but not baked yet! 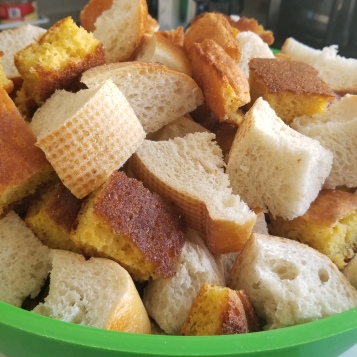 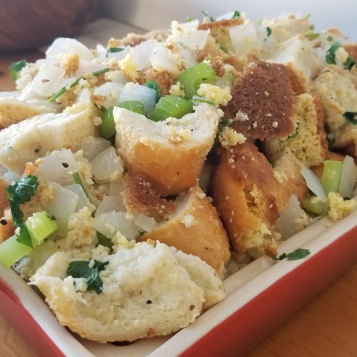 Next I prepped the sweet potatoes.  Now that they’re out of the oven, the innards were scooped out and mashed with milk, sugar, eggs, vanilla, and salt.  The mixture was poured into a buttered baking dish.  For the topping, all of the ingredients were combined and sprinkled over top of the sweet potatoes.  Into the oven it goes! 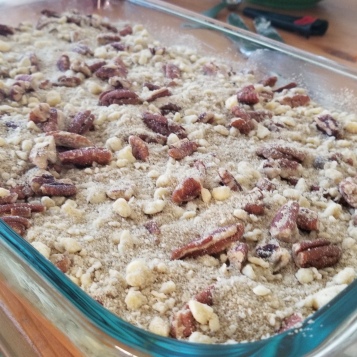 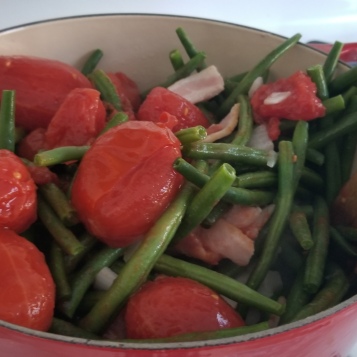 The sweet potatoes can be served at room temperature, but the green beans are best hot so I wrapped them up in aluminum foil and towels to keep them warm.

And finally, the Thanksgiving Dressing.  This was pretty much ready to go, so all I needed to do was pop them in the oven.  This one apparently needs to be cooked right before we eat, so I asked the host if I could use her oven ahead of time.  Thankfully they only take about 20-25 minutes, and the turkey was resting during that time so the oven was available! 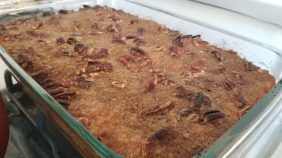 This was all REALLY delicious.  The apple pie was definitely my favorite, but it was all super tasty!  I actually had a couple of people try to convince me to give the sweet potatoes 10/10 as well, but I thought it just wasn’t quite as good as the sweet potatoes I’ve brought in the past.

None of these recipes were too difficult to make, thought they do take a lot of time and some steps go a bit slowly!

As with nearly all of The Pioneer Woman’s recipes, these can get quite pricey.  Especially when you’re making the whole feast!  But it’s the holidays, and it’s worth it!

Make the cornbread two days in advance to give it extra time to dry out.  Mine wasn’t quite dry enough, and it crumbled a lot when I mixed it with the liquids.