A review Steak and Ale Pie from “An Unexpected Cookbook: The Unofficial Book of Hobbit Cookery”

I think this is the most disorganized recipe from the cookbook, but it tasted really good!

I started off by cubing, chopping, and slicing my meat and veggies.  Then bacon was cooked over the stove and set aside. 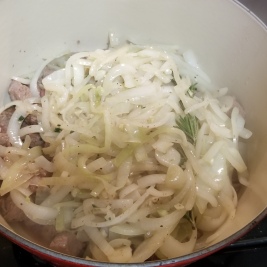 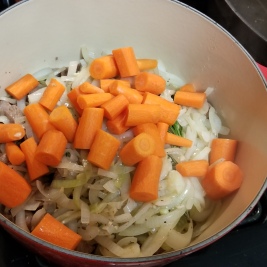 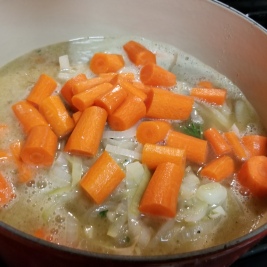 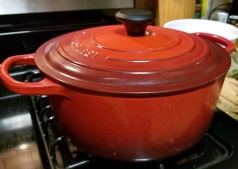 While the pie’s meat filling is cooking, I prepared the crust.  This was really just combining all ingredients until they stick together.

I found they weren’t very clear about which dish to use.  It says a “casserole dish” (no size specified, and mine is 9×13 which is definitely too big) or a “cake pan.”  I used a pie dish because, well, this is a pie isn’t it?  And my pie dish is deeper than my cake pan, but the same circumference.

Even though I selected the smaller option to put my pie in, there definitely wasn’t enough crust.  I really had to stretch it, and there certainly weren’t any leftovers to make fun shapes with like the recipe claimed there would be.  I’m really glad I opted NOT to go with the casserole dish!

When the dough was finally rolled out and put in the pie dish, I added the meat filling.  I had more than half the filling left, so I would cut the filling recipe in half next time.

Once the filling is in, the rest of the dough is rolled out an put on top, brushed with an egg, and popped in the oven to cook. 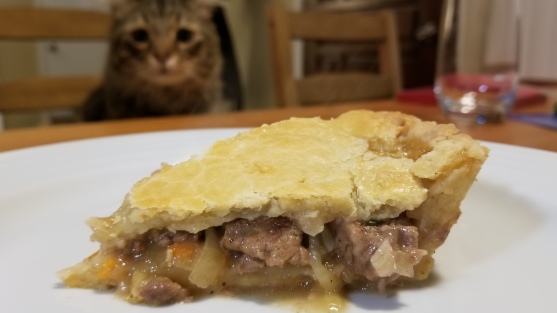 Nearly perfect!  This was a very good pie, though I’m curious how it would taste with the missing mushrooms and bay leaves added in.  It may also be tastier to just have the crust on the bottom or top (not both).

The most challenging part is working with the dough and getting it to a large enough size to fit into your baking dish.  Otherwise this recipe just takes a lot of time.

This is a bit higher on the “average” side, but not quite an expensive meal yet.  The meat can get pricey, but since it’s more or less a stew you can use cheaper beef.  There’s also ale and quite a few veggies involved.

Cut the filling in half, and possibly the crust too if you’d rather just have one layer of crust.  It seemed like I had more crust than filling in the pie itself, but had TONS of leftover filling without any pie crust at all.