A review of Roast Rack of Lamb from “An Unexpected Cookbook: The Unofficial Book of Hobbit Cookery.”

Wow, did this recipe have problems!  Overall the flavor was okay, but getting through this was torture.

The very first instruction is to “mix everything but the lamb until you have a thick paste.”  So I did exactly that, but mine was way more liquid than a paste should be.  I thought that was kind of weird, but rubbed this oily mixture all over the lamb as instructed (after removing the extra fat on the lamb).

Turns out, the very first instruction is wrong and the sherry, apple cider vinegar, and mustard were all supposed to be saved for a later part of the recipe.

I let the lamb rest for 2 hours until it was room temperature, and then I cooked it as per their instructions.  The instructions specifically state, “residual heat will keep cooking the meat, so seriously, don’t leave it in the oven for more than 22 minutes total.”  Well at 22 minutes, this lamb did not look cooked at all.  Yet I headed their “seriously” warning, removed the lamb, wrapped it in tin foil, and let it sit for 20 minutes before cutting into it.

Now if I hadn’t already used the sherry, apple cider vinegar, and mustard as part of the coating mixture, this is where they come in.  They’re added to the pan that the lamb was cooked in, all the lamb bits are scraped off, and the liquids are cooked until a gravy forms.

I was debating whether I should try this step, even though my lamb did not leave any bits for me to scrape up as promised, but then I kept reading.  THE RECIPE NEVER ADDS THIS GRAVY TO THE LAMB!  In fact, after you make the gravy it’s never mentioned again.  So I skipped it.

Finally it’s time to unwrap the lamb and cut into it…and it was totally raw.  Well, back into the oven it goes!  This time I followed instructions online (cook 15 minutes at 450) and it turned out much better. 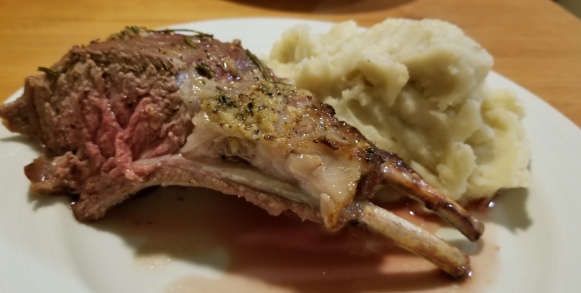 Husband gives this 5/10.  Neither of us big fans of lamb, though, and I’m sure it would have been better had the instructions been clearer and it was cooked properly the first time around.

The steps themselves aren’t too complex, but the very poorly written instructions add unnecessary complication.  And I don’t think they should have put a “seriously, don’t cook past 22 minutes” warning.  People will actually take that warning seriously, like I did, and end up creating more work for themselves.

Skip this recipe, there are too many mistakes.  If you’re going to go for it anyway, though, then make the following changes:

I also recommend cooking the lamb in a pan or pot that can go both on the stove and in the oven, since this will make cooking the gravy easier at the end.