A final review of “An Unexpected Cookbook: The Unofficial Book of Hobbit Cookery”

This is the first cookbook that really disappointed me.  The instructions were often confusing to follow, vague, duplicated or missed steps, and sometimes even the measurements were incorrect (i.e. tbsps of spices instead of tsps in Baked Scotch Eggs and Roasted Apples).

Because of these awful instructions, I think a lot of the recipes would have turned out better had the cookbook been properly written and edited.  I really doubt that anyone went through this cookbook and tried all of the recipes before releasing it.

The recipes are not based on food directly from the book or movie, but on what the author J.R.R. Tolkien would have eaten as a child in his English village in the 1890s.  In his letters, Tolkien claimed that the Shire was based on his village during that time period so it makes sense to use recipes from that area.  They did a pretty good job of adapting recipes based on what would be available in that time and place.

Despite the poor instructions, the cookbook did seem to really shine when it came to baked goods and broths, and I will be saving 30-40% of the recipes I tried (8/22): 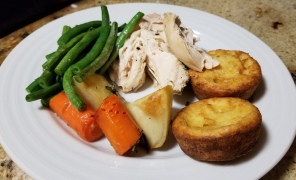