A review of Larry’s Cherry Chocolate Kiss Smoothie from the Orange is the New Black Cookbook.

It’s almost Valentine’s Day!  And while this isn’t specifically a Valentine’s recipe, it is red (or it’s supposed to be) and it has the word “kiss” in it, so I think it qualifies.

This recipe isn’t specifically seen in the show (at least not that I remember!), but Larry does list “cherry juice for smoothies” among the items he picked up from Whole Foods while speaking with Piper over the phone.

It’s a smoothie…so, as you probably assumed, the instructions are “toss everything into the blender and blend.”  The only thing not tossed in are “cocoa nibs” (I used grated chocolate). 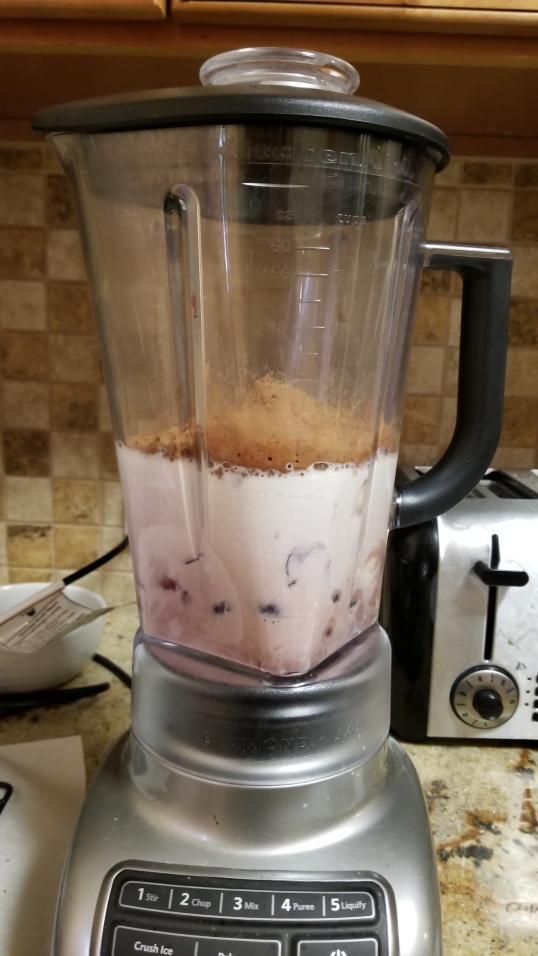 My husband didn’t like this as much as I did, but I didn’t really love it either.  He doesn’t like banana and chocolate combined (I know, he’s a weirdo), and that’s mostly what this tastes like.  I happen to LOVE banana and chocolate, but I wasn’t so thrilled about the almond extract and cherries.

Toss everything into blender, and hit the power button.

For this recipe, while you likely have the cocao powder (note this is NOT “cocoa”), milk, and salt, you may need to purchase cherries, banana(s), cherry juice, and almond extract.  Cocoa nibs are optional!