A review of Buckwheat Pancakes from The Desperate Housewives Cookbook. 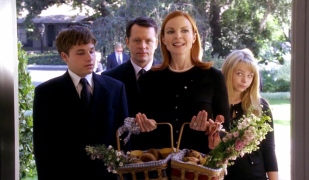 I still have one more “Susan” recipe to make, but I need to collect my fondue pot from my parents’ house first.  So in the meantime, I’m moving on to Bree Van De Camp!  Since Bree is actually a chef in the show, her recipes are a little more “upscale” than the others.  And I’m sure they’re also delicious!

What’s cool about this recipe is you can make a ton of the pancake mix ahead of time and store it, and then just add milk, butter, and eggs when you’re ready to make them!

The pancake mix itself is a combination of all-purpose flour, buckwheat flour, sugar, baking powder, and salt.

The pancake mix is then combined with milk, melted butter or vegetable oil, and an egg, and mixed until it’s just blended.

Once it has been left untouched for 10 minutes, it’s time to cook them! 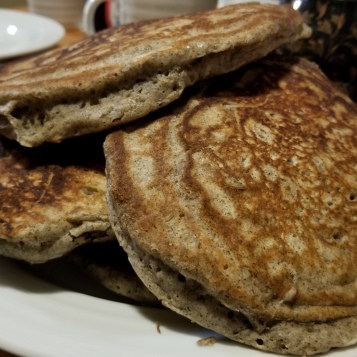 They cook pretty much the same as regular pancakes.  About 2/3 of the batter is poured onto a griddle (or pan in my case) and cooked on one side until the underside is golden and little bubbles are popping up on the top.  Time to flip!  The other side cooks until golden brown as well.

Then serve topped with butter and maple syrup!

These were good, but they certainly weren’t as good as regular pancakes.  And I thought the buckwheat left a strange aftertaste.

They’re about the same difficulty as regular pancakes.  If you’ve only ever used the mix from the box, pretty much the only difference is mixing more ingredients together beforehand.

Ingredients include all-purpose flour, buckwheat flour, sugar, baking powder, salt, milk, butter, an egg, and maple syrup.  Most people will already have a lot of these ingredients on hand!