A review of the New Bacon-ings Burger from the Bob’s Burgers Burger Book.

Well, we’re not off to a great start with this Bob’s Burgers cookbook.  This is the first recipe in the book, and I’ve already found several errors.  #1 being that cheddar cheese is required on this burger, but is not listed as an ingredient.  Thankfully my husband had some leftover colby jack, which sufficed!

I started with the fries first.  Peeling them is optional, but I chose to do that rather than wash the potato.  And then the potato is cut into fries.  They are soaked in ice water for 5 minutes or more, and then dried thoroughly before being “blanched” in cooking oil. 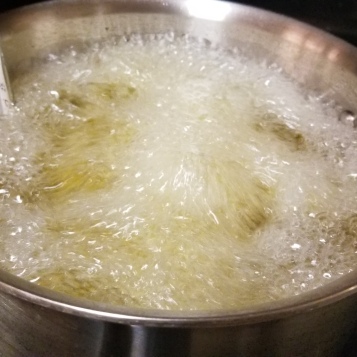 The blanching is basically cooking them at a slightly lower oil temperature for 5 minutes, but not letting them turn brown.  Mine started turning brown within 2-3 minutes, even set to the correct temperature they ask for, so I removed them earlier.  Then they are left to cool completely. 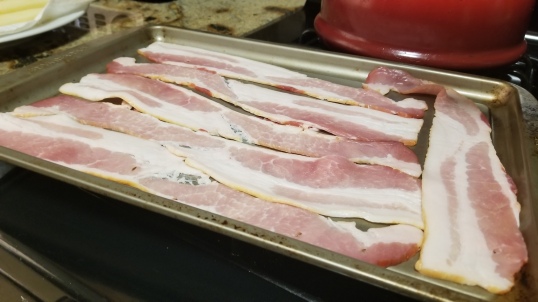 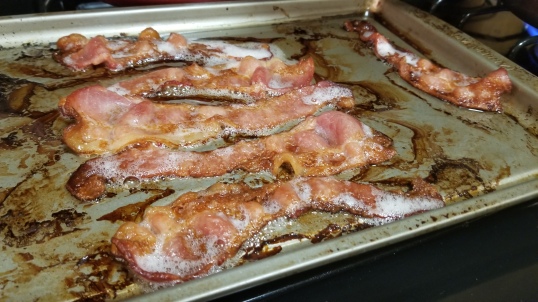 While the oil for the fries heated, I cooked the bacon in the oven until nice and crispy.  Once finished, two of the bacon slices were crumbled up.

Once cooled, the fries are tossed with an egg/milk mixture and then mixed with the crumbled bacon before baking in the oven.  I left them in the oven for the longest amount of time quoted in the recipe, but they were still under-cooked. 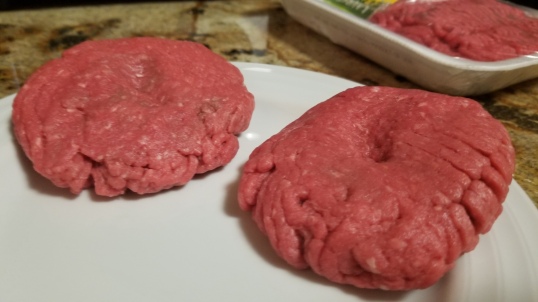 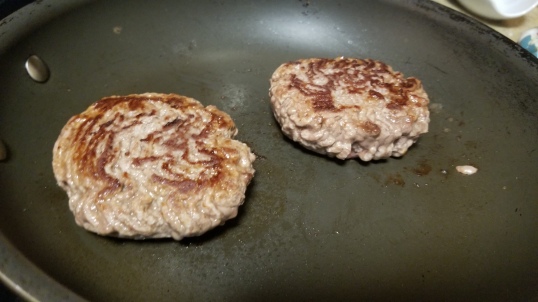 While the fries baked, I formed the burger patties.  Surprisingly, the burger patties were just plain ground beef with nothing added except salt and pepper.  The instructions on how to cook the burgers was “cook your burgers,” so not very detailed at all.  I cooked ours over the stove, since we don’t have access to a barbecue at our house.

Then I rinsed a couple of lettuce leaves and sliced up some cheese, tomato, and onion while I waited on the burgers.  When the burgers were nearly done, the cheese is added on top and left to melt. 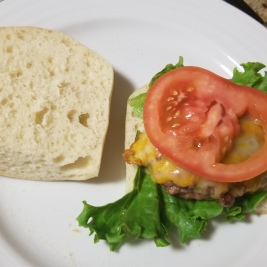 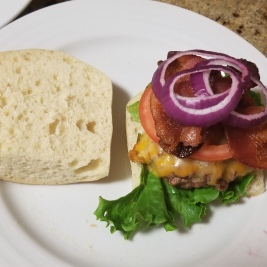 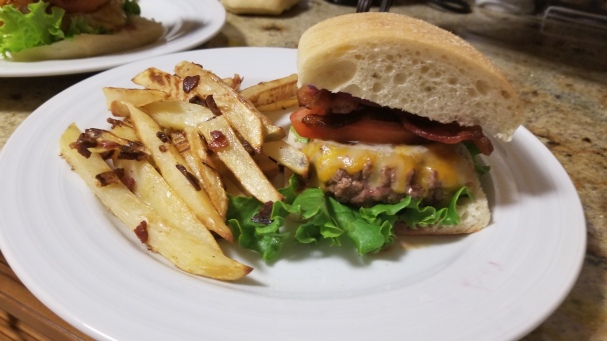 The burgers were good, but they honestly just tasted like a regular cheeseburger with bacon to me.  I wish they added some extra flavor to the burgers, like garlic or Worcestershire sauce, to make it even a little bit interesting. 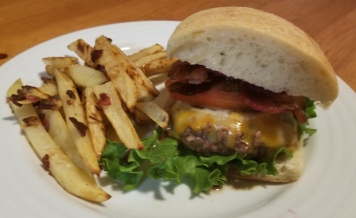 The fries were definitely under-cooked, but my husband was forgiving since they were cooked with bacon (his favorite).  I was a little disappointed and ended up giving most of mine to him.

Lots of steps to this burger, especially with the bacon fries included, so don’t expect this to be quick.  As far as difficulty goes, the instructions are a bit vague which makes following them a bit more challenging, but all in all the recipe wasn’t overly complicated.

You will need a russet potato(es), oil for frying, bacon, ground beef, milk, egg, hamburger buns, lettuce, tomato, and red onion…and of course the cheddar cheese that they forgot to include in the ingredients list.