A Feast of Ice and Fire: Aurochs Roasted with Leeks

A review of Aurochs Roasted with Leeks from the “A Feast of Ice and Fire” cookbook.

Nothing says Game of Thrones like a giant slab of beef!

I chopped up the leeks and carrots to start, peeled the garlic, and then threw it all into a roasting tray (I used a large baking dish).  It’s drizzled with oil and tossed to coat. 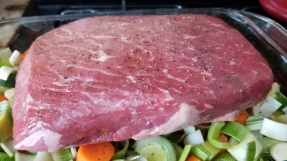 Then the beef is covered with oil and salt and pepper and placed on top before going into the oven.

While the beef cooked, the “Medieval Black Pepper Sauce” was prepared.

This was a weird one!  I started off by burning a piece of toast in the toaster, and then soaked it in liquids before mashing it all up, mixing with spices, and cooking over the stove.  It’s supposed to boil over the stove, but mine wasn’t liquid enough to do that.  I added some more liquid, but it still smoked more than boiled.

To serve, the beef is sliced, the black pepper sauce is put on top, and it’s served with a side of veggies.  Delicious! 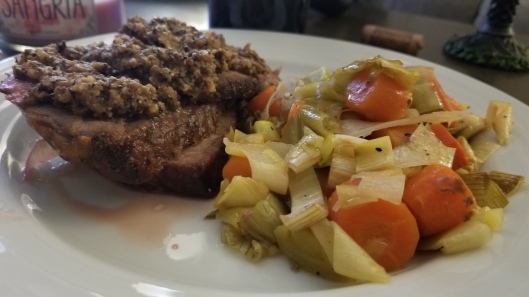 This was actually really good.  The black pepper sauce was a bit too much pepper for me but my husband LOVED it, and I could just scrape off the excess to cut down the amount of pepper.

It paired extremely well with the Game of Thrones Red Blend we bought for tonight’s new episode!

The meat and veggies are easy to make, but what makes me unsure whether to put Easy or Average is the pepper sauce.  It’s not really difficult, but it’s something completely new for most people and may not “boil” as described.  I think for the sauce you’ll need some past stove experience to know how long to cook the mixture without burning it.

The most expensive part of this meal is definitely the beef (or bison if you choose).  Other ingredients include leeks, carrots, garlic, herbs (4 options), bread, verjuice or cider vinegar, red wine vinegar, ground ginger, olive oil, and salt and pepper.