The Walking Dead: Lori’s (Not So) God-awful Pancakes

By Jessica in Recipe Reviews on June 22, 2019
No comments

Lori’s (Not So) God-awful Pancakes

I’m so happy to be cooking again after such a busy few weeks!  To kick it off, I made pancakes this morning for breakfast 🙂

In the fourth episode of the fourth season of walking dead, while Rick and Carol are picking vegetables, they start reminiscing about the past.  One of the things Rick remembers are the God-awful pancakes Lori used to make on Sundays.

These, however, are not God-awful!

The dry ingredients are mixed in one bowl, the wet in the other, and then the two are combined.  They key here is not over-mixing.

Then it’s dropped into the pan and cooked like any other pancake – wait until bubbles start popping through and the bottom is browned, then flip and cook until the 2nd side is browned as well.

These were really fluffy and delicious!  They taste like most other pancakes, but the buttermilk and salt are great in this and they cooked really nicely.  Add some maple syrup and they’re perfect! 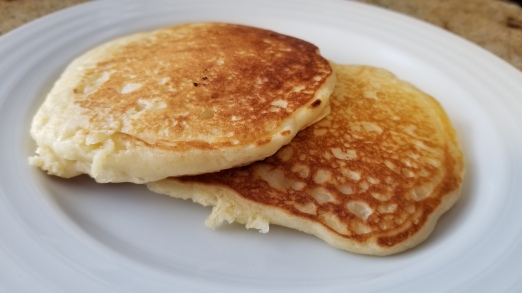 You’ll likely have most of the supplies already (flour, sugar, baking soda, baking powder, salt, eggs, butter, and oil).  The only other item is buttermilk.