A review of Traditional Iced Green Minty Drink from the “A Feast of Ice and Fire” cookbook.

“Slave girls scurried through light and shadow, bearing flagons of ale and wine and some iced green drink that smelled of mint.” – A Dance with Dragons 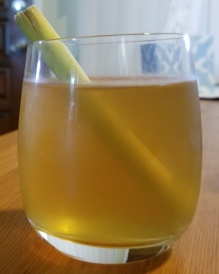 According to the cookbook, this recipe is actually inspired by traditional Moroccan mint tea!

The teabag is steeped in boiling water, and then honey and mint leaves are added and it steeps a bit longer.  The recipe says the tea could be drank hot, but since it’s “iced” in the book I decided to refrigerate ours first. 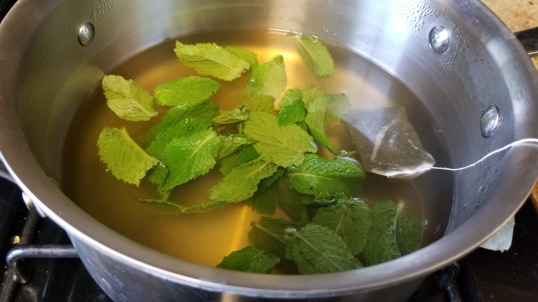 It’s served in small glasses with a lemongrass stalk!

Just like it’s modern counterpart, I’m giving this a 10/10!  It was SO tasty!  The mint was very refreshing, and the honey was my favorite addition.  I could definitely see serving this on a hot summer day.

Easy peasy!  Just boil water and steep things in it for a certain amount of time.

You’ll need green tea with matcha, honey, mint leaves, and lemongrass stalks.  Though honestly, you can ditch the lemongrass to save a little money – it’s just for decoration.