A review of Sweet and Tangy Chicken Stir-Fry from The Desperate Housewives Cookbook.

I love stir fry, and am always up for trying a new stir fry recipe!

This particular recipe is found in Gabrielle Solis’ section of the Desperate Housewives Cookbook, and I could see this somewhat simple meal being part of her recipe collection.  Gabrielle doesn’t seem like one to spend too much time in the kitchen!

First, the chicken is soaked in a mixture of orange juice, soy sauce, sugar and sesame oil.  I actually cut up the veggies while the chicken soaked, to make sure it got as much of the orange/soy sauce flavor as possible.

While the chicken is marinating, the scallions, ginger, and garlic are sauteed over the stove.  Then the chicken is added, followed by celery and snow peas. 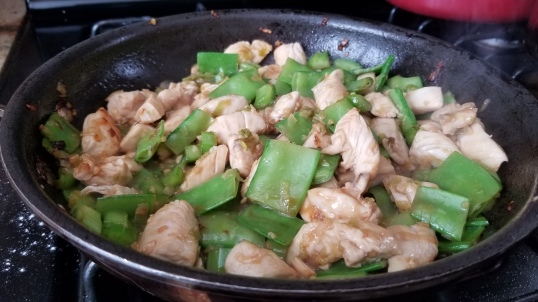 Once it’s all more or less cooked thoroughly, what’s left of the orange juice / soy sauce mixture is thrown into the pan and cooked until a nice thick glaze coats everything.

Serve with rice (which is not listed as an ingredient, by the way, so you’ve been warned)!

This was very good.  I actually really liked the orange juice in there, which I was a little on-the-fence about at first.  Except for my mom’s stir fry, this is the best I’ve had so far.

It takes some prep time, but the recipe itself is quite simple.  Mostly it’s throwing things into a pan and waiting until they’re cooked through.