A final review of “The Desperate Housewives Cookbook.”

By Jessica in Cookbooks on August 9, 2019
No comments

I’ve actually reviewed 26 recipes from Desperate Housewives so far – I got a little excited and kept going after the first 20, forgetting to write this review!

The difficulty is between easy and average, depending on the recipe.  It’s not actually very common for me to see as many “easy” recipes in a fiction-based cookbook!  It’s especially helpful on those days where I’m overwhelmed with work and don’t have the energy for something complex. 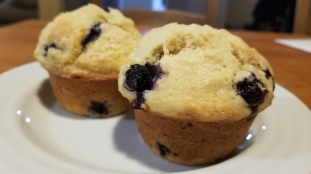 Cost-wise, I’d say we’re around average overall.  Some items are cheap, and some will push your wallet’s limits a little bit, but overall they’re pretty average in price.

Most of the recipes are not in the show, but I still think the cookbook’s pretty authentic.  They divide each section up by character, and the recipes are based on what we’d expect the characters to actually make.  And for the most part, they’re pretty spot on!  Lots of easier recipes come out of Susan’s section, since she’s not the best cook of the bunch.  More complex and fancy recipes are found in Bree’s section, and family-friendly options in Lynette’s.  Gabrielle’s has some more exotic and healthier options.

And in the end, out of the 26 recipes I’ve tried so far I ended up saving five!  Several got really close to being added to that list though.  Here are the ones I’m keeping:

Nothing saved from Susan yet, but I came pretty darn close to keeping her Baked Stuffed Shells and Asian-y Turkey Burgers!