A review of Vee’s Butternut Squash, Leek, and Ginger Soup from the Orange is the New Black Cookbook.

Autumn is the perfect time to try a butternut squash soup…unfortunately the weather is not cooperating right now, and it’s a little warm for soup, but I decided to go for it anyway!

I opted to make the leek broth that’s included in the cookbook, but there’s an option to use store-bought vegetable broth instead.  The broth was easy to make, though.  Just cut off the dark greens of the leeks (and rinse thoroughly!), add chopped vegetables (all optional) and 6.5 cups of water, and then simmer for 45 minutes before draining out the veggies.

Next I prepared the squash.  It’s peeled, cut in half, the seed are removed, and then it’s cut into cubes.  The cubed butternut squash is tossed with olive oil, balsamic vinegar, salt, and pepper, and then roasted in the oven.

While the squash cooked, I chopped up the whites and light green part of the leeks and rinsed thoroughly, and also minced the ginger.

First the leeks are sautéed in butter, then ginger is added, and then turmeric.  Now some white wine is used to break up the browned bits from the pan, and then the roasted squash and broth.  It’s simmered for 15 minutes.

In batches, the soup is blended in a blender until smooth, and then mixed with heavy cream (optional) before serving.  We had ours with a spoonful of sour cream on top (also optional)!  The recipe suggests roasted pumpkin seeds as well. 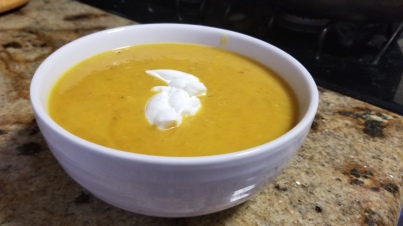 I would definitely make this soup again!  It was delicious, and actually a bit sweet!  I recommend adding the sour cream, but it doesn’t need it.

As far as soups go, it wasn’t exactly the easiest of recipes and it did use a lot of dishes, but it’s not difficult either.

It’s the white wine that could bump up the cost, so I suggest getting a cheaper bottle.   You only need a couple of tablespoons, so use the rest for another recipe or pull out a wine glass and enjoy!