A review of Dressing with Dried Fruit & Nuts, Broccoli-Wild Rice Casserole, and Pecan Pie from The Pioneer Woman Cooks: A Year of Recipes.

This year I brought the pecan pie, stuffing (dressing with dried fruit & nuts), sweet potatoes, and a vegetarian dish (broccoli-wild rice casserole) to our annual Thanksgiving!  The sweet potatoes are from the Hunger Games cookbook, but the rest are from the Pioneer Woman Cooks: A Year of Holidays.

I kicked off the Thanksgiving cooking-fest this year with the cornbread for the dressing.  I’d made it last year as well for the Basic Thanksgiving Dressing, and it’s a pretty simple recipe. 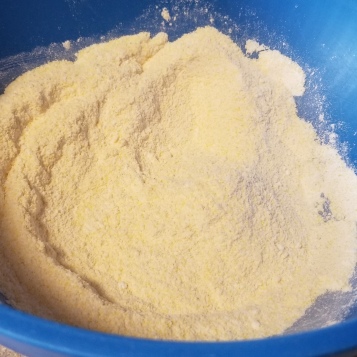 The dry ingredients are mixed together in one bowl, the wet in another, and then they are combined.  At this point, vegetable shortening is melted in the microwave and mixed into the batter.  More shortening is melted over the stove in an iron skillet (I didn’t have one, so I used a stainless steel skillet instead) and then the batter is poured in.  It cooks for a minute, then goes into the oven until it’s done. 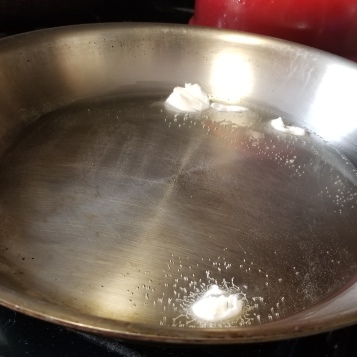 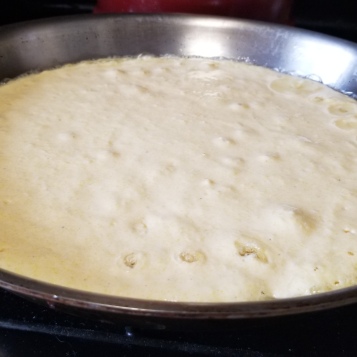 While the cornbread cooked, I made the crust for the pecan pie and popped it in the freezer, and then chopped up the pecans.

Once the cornbread was cool enough, I cut it into cubes and spread it out on a baking sheet to let dry out.  Last year the cornbread hadn’t dried long enough and crumbled quite a bit when I mixed it with the chicken stock.

Most of yesterday was spent chopping and on general cooking prep, but I did make the pecan pies as well. 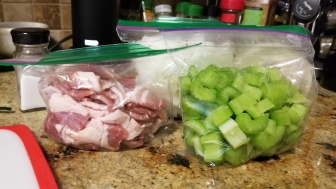 For the dressing, I cut the French bread loaf into cubes, like I had done with the cornbread, and left it out on a baking sheet to dry.  The bacon was cut into pieces, and the prunes and dried apricots were chopped in half.  The onion and celery was also diced, and the rosemary minced.

The casserole also had a lot of prep done yesterday.  The broccoli heads were cut into florets, the onion and celery diced, the carrots peeled and diced, the mushrooms chopped, and the parsley was minced.

The last step yesterday was to make the pecan pies.  The dough is removed from the freezer in advance (the recipe says 30 min. but I needed 1 hour and 30 min.) and then rolled out and transferred to a pie tin.  All of the remaining ingredients, except the pecans, are mixed together to make a gooey combination.  The pecans are scattered into the bottom of the crust, and then the gooey mixture is poured on top. To start it’s covered with tin foil while baking, and then the tin foil is removed for the remainder of the cooking time. 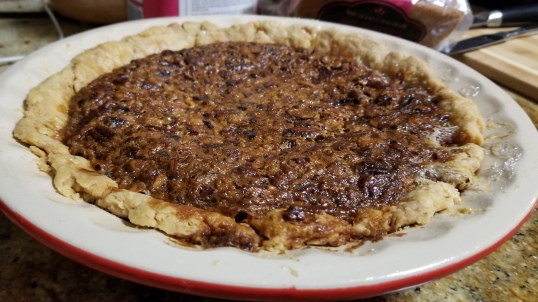 The recipe says it will only take 25-30 minutes once the foil is removed, but I needed more.

This morning I started with the piercing and baking the sweet potatoes.  While they baked, I prepared the dressing up until baking it, which mostly included cooking bacon, vegetables and broth over the stove and pouring it over the dried bread, and then covered it with foil. 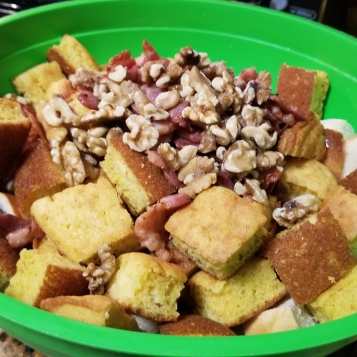 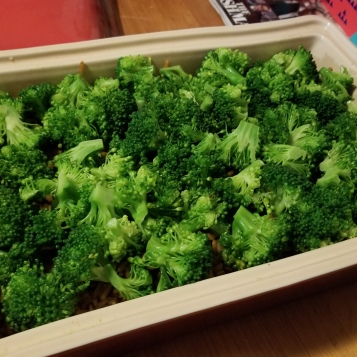 Once both were ready, I baked the sweet potatoes first, followed by the broccoli-wild rice casserole, and made sure to wrap up both tightly with tin foil and in towels so they’d keep warm until dinner was served.

The final step was cooking the dressing, which I did right as the turkey came out of the oven (since it needed to settle for about an hour).  It just cooked for about 25 minutes until done.

All of this was quite good, but the pecan pie was the winner this year.  I’ve been told by the Thanksgiving host that it needs to make a reappearance next year as a Thanksgiving staple!

Besides a lot of chopping, dicing, etc. during the prep, these were all fairly straight-forward recipes.

Nothing crazy expensive here, but they all do require quite a few ingredients that aren’t extremely common.