A review of Flaca’s Holiday Tamales from the Orange is the New Black Cookbook.

These have taken me ALL DAY to make, so prepare yourself if you’re planning to make these for the holidays this year!  The tamales make an appearance in the Season 1 finale.  Gloria is overseeing the making of the tamales in the kitchen, and Daya mentions that it “feels like Christmas at home.”

The very first step is to submerge the corn husks in hot water and soak them for at least two hours.  The filling is prepared while the husks soak.

For the filling, a lot of spices and goat meat are added to water and left to simmer for about an hour until the meat falls apart fairly easily.  The meat is then removed, shredded, and mixed with raisins and chopped olives.  1.5 cups of the broth is removed, and the rest is mixed with masa harina (corn flour) and returned to heat to thicken into a sauce.  About a cup of sauce is combined with the meat mixture. 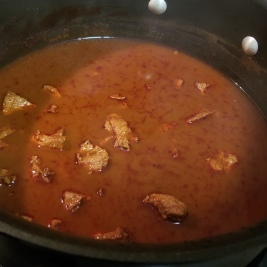 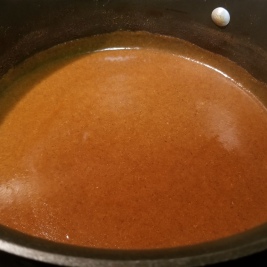 For the dough, masa harina is first combined with hot water.  In an electric mixer, lard (I used vegetable shortening), salt, and baking powder are beaten together until fluffy.  Then the masa harina / water mixture and 1 – 1.5 cups of the reserved broth are added in and combined thoroughly. 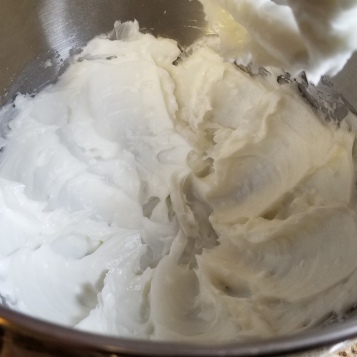 I thought this next trick was pretty cool…or it would have been if it had worked.  Maybe my water wasn’t boiling enough.  The trick is to put a penny at the bottom of a deep pot that you’re planning to use for steaming.  When the water boils, the penny will rattle (mine did not rattle much, though), and when you run out of water the penny will stop rattling.

The steamer is set up for boiling with the penny at the bottom, and the tamales are prepared for steaming.  The directions here were not easy to follow for someone like me with no tamale experience, and I’m pretty confident that I rolled up my tamales incorrectly.

Once I selected my “wrapping” husks and cut strips from some of the remaining husks, I laid out the “wrapping” husks and spread out an approximately 4-inch square of dough in the middle of each.  I made sure there was a large enough border along each side without any dough, as the recipe requires.  Filling is spooned into the middle of the dough, and then the two long sides are picked up and brought together to enclose the filling within the dough.  One end is folded over and it’s secured with a tie (strip of corn husk). 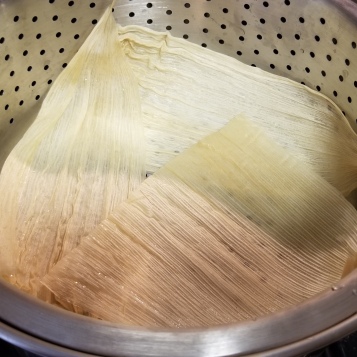 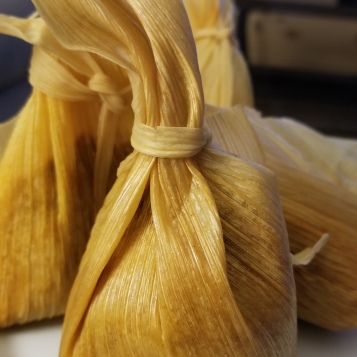 Once the tamales are lined up in the steamer and covered with corn husks, the last step is to steam them for 1.5 hours before serving with the reserved sauce.  I cooked ours for an extra 15 minutes and I don’t think the dough was quite hard enough still, but I have nothing to compare it to so I don’t know for sure.  I also didn’t have any reserved sauce left, but that would have been a great add.

I was soooo close to giving this a 10/10.  I was surprised, because I honestly didn’t think they’d turn out so well.  There were a few things in there I wasn’t excited about (goat meat, raisins, and green olives) but they worked well together and all in all this was very tasty!

These are not fast and easy to make.  They takes all day, and there are a lot of opportunities to make a mistake!