A review of Bacon Cheddar Waffle Sandwiches from the 50 Shades of Bacon cookbook.

The very first item I made from this cookbook was a request by my husband: Bacon Cheddar Waffle Sandwiches.  He is a HUGE fan of breakfast food, and he could not stop salivating over this one.

The first step is to cook up the bacon and drain it.

The recipe calls for store bought container waffle mix or frozen waffles.  I tried using bisquick, but the mixture was pretty runny and didn’t cook well.  Maybe because it’s been in my cupboard for centuries, and had expired a couple of months ago.  So I ended up cooking up a batch of the Orange is the New Black waffles instead which turned out great! 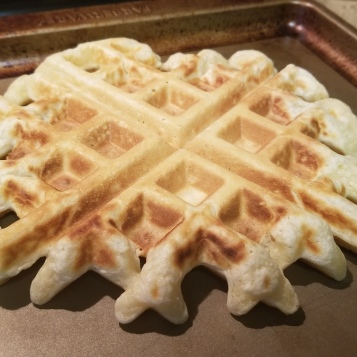 Then the waffle sandwiches are assembled: waffle, cheddar cheese, bacon, waffle.  The recipe called for a nondescript amount of cheddar cheese per sandwich, so I just loaded it up.  It said only 2 slices of bacon per waffle, but that didn’t seem like enough for a full waffle so I added more.  For a half-waffle, 2 slices is perfect.

Finally, the waffles are popped in the oven until the cheese melts, and served with maple syrup if you’d like.

My husband gives this a full 10/10, but it was just a little too much breakfast food all at once for me.  The cheddar and bacon and waffle of course all taste great together, but I was on the fence about the optional maple syrup.

You will need to make waffles and cook bacon, but neither is very challenging.  The waffles will depend on which recipe you use – i.e. if you use frozen waffles, this recipe becomes easy but probably won’t taste quite as good as if you were to make your own waffles or use store-bought mix, which will add to the difficulty.