A review of the Bacon Feta Pizza from the 50 Shades of Bacon cookbook.

This is one of the recipes I was particularly excited to make!

The dough is made a day in advance.  The recipe didn’t indicate which type of yeast to use (it just said “yeast mix”), so I used Dry Active yeast.  I’m guessing it’s this one because the recipe begins with the yeast soaking in warm water for 10 minutes, which is what active yeast needs to do.

All of the dry ingredients are mixed together for the dough, and then the water with yeast is mixed in.  I needed to add a bit more water to make sure the dough was the right consistency, but this step is accounted for in the recipe.  The dough is kneaded (for an un-described number of times / length of time) then rises for an hour, is punched down and re-kneaded, and then is covered and left in the fridge to rise for about 24 hours. 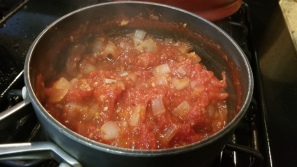 I made the sauce in advance too, since the recipe indicated it would keep.  This part was pretty simple.  The ingredients are all mixed together and simmered over the stove until it’s thicker and slightly reduced.  There was an issue with the instructions here too, but I think the answer was pretty obvious in this case – it never said to chop up or mince the garlic and onion, but that step is definitely needed.

Once I was ready to actually start making the pizza, the first step is to put the pizza stone (which I did not have) into the preheated oven.  The oven is supposed to be set to 550F (my oven only went to 500F).  I skipped this step, but did set my oven to the 500F and used the back of a baking sheet as my “pizza stone.”

The pizza stone is sprinkled with flour, and then the dough is rolled out to fit the stone.  Sauce is added first, followed by the cheeses, and finally the bacon bits.  Then it all cooks until the cheese is melted and the crust is golden brown! 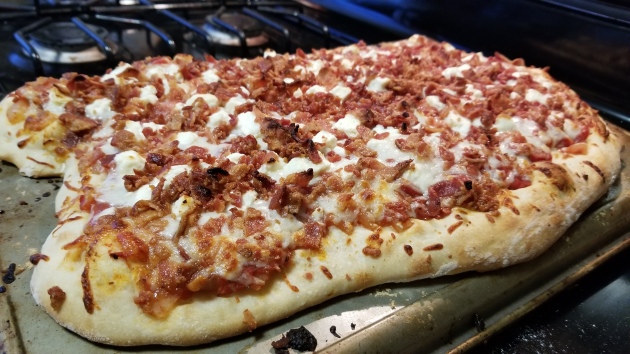 This tasted like a fast food pizza in the best possible way!  It was like it was delivered straight from Pizza Hut!

The lack of instructions make this recipe more challenging if you haven’t made pizza dough before, aren’t familiar with reducing a sauce to thicken it, etc.